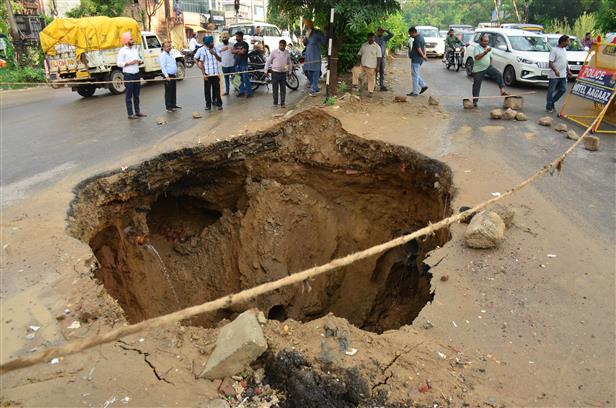 The caved-in portion the road near Ishmeet Chowk. Ashwani Dhiman

A big portion of road caved in again within only 10 days at the same spot near Shastri Nagar Railway Crossing (near Ishmeet Chowk) here. Soon after the rain started today, a big pit appeared on the road. It was a narrow escape for commuters.

Municipal Corporation officials found that the civic body’s old brick sewer line (also known as dat sewer) has collapsed, resulting in the cave-in. An official said the pit seems to be around 20 feet deep and 25 feet long.

Notably, a similar incident had occurred on September 12 at the same spot and then, officials had claimed that a sewer chamber had got damaged. The officials had then also blamed an eatery owner for the incident. They had accused the owner of attaching his eatery’s connection with the MC’s sewer line in an improper manner, leading to the cave-in.

The fresh pit looks bigger than the previous one. Now, the MC officials said the old brick sewer had got damaged. Meanwhile, the road portion had been barricaded. It might take a few days to get the damaged sewer line repaired.

Raising questions over the role of the MC, an activist, Arvind Sharma, said the public needs to be careful while commuting or walking on city roads as road cave-ins had become a routine here. The chances of road cave-ins remain high on city roads but the authorities concerned were yet to ensure safety of the public. “It seems the actual fault behind the previous cave-in was not found by the civic body officials in a proper manner. Hence, the road portion caved in at the same spot today,” he said.

After visiting the site today, MC Executive Engineer Pardeep Saluja said a portion of brick sewer line that was around 45 years’ old had got damaged that led to the cave-in. The barricading around the damaged portion had been done and it might take four or five days to get the damaged sewer line repaired.

Notably, the Finance and Contracts Committee (F&CC) of the MC recently gave its nod for a project for the trenchless rehabilitation of existing storm water drains with a standalone structural technology in some areas (ABD areas). Under the project, the old brick sewer line passing from Shastri Nagar, Malhar Road, Dhami Eye Hospital Road and up to the Buddha Nullah was to be rehabilitated, said an officer.