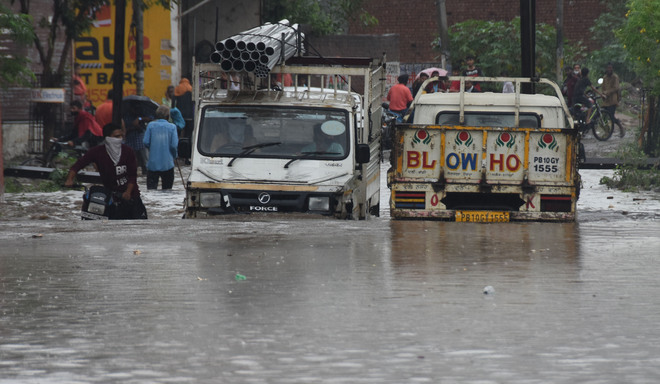 Amid big dreams being shown by politicians to make Ludhiana a smart city, waterlogging was witnessed in various parts of the city while sewers overflowed badly on various roads after the rain that started in the wee hours today. The PAU recorded 122 mm rainfall today.

Meanwhile, the rainwater flowed into several houses and shops in low lying areas along the Buddha Nullah, said Keemti Rawal, a resident of Chandar Nagar, who also sent a complaint to the Punjab State Human Rights Commission in this regard. Also, several vehicles, including cars and two-wheelers, developed snags while passing through waterlogged roads.

No relief on Panj Peer Road

The Municipal Corporation had made efforts to resolve the problem of waterlogging on Panj Peer Road in Ward 78, where Mayor Balkar Singh Sandhu is a councillor. But, sewers overflowed badly on the road today, leaving residents of the area and commuters to suffer.

The MC had installed a stormwater drainage system on Rani Jhansi Road recently but a portion of the stretch was also inundated. Besides, the MC had got an old drain, which was closed over two decades ago, reopened to check waterlogging at Dholewal Chowk and nearby areas but water was also accumulated there.

Water accumulated at various locations on the NH-44 (Delhi Road), Ferozepur Road and Chandigarh Road today. A resident of Aggar Nagar, Rajesh Bansal, said: “The Elevated Road project is underway on Ferozepur Road but a major waterlogging troubled commuters on the road. A number of rain harvesting borewells were not functioning.”

The Southern Bypass underpasses flooded again today. Also, a few vehicles got stuck there due to water accumulation. Besides, waterlogging occurred at an underpass near Chand Cinema and under a railway bridge along the Buddha Nullah.

According to the PAU, the weather is expected to remain cloudy with the possibility of rain in Ludhiana and its adjoining areas during the next 24 hours.

Officials remained on their toes due to the swollen Buddha Nullah since the morning. Kumar Gaurav of Yuva, an NGO, said the Buddha Nullah overflowed near New Kundan Puri. While holding a protest while standing on a waterlogged road, he raised the issue of chronic water accumulation in areas along the nullah. He also raised questions over the MC’s preparations for the rainy season.

Meanwhile, sandbags were placed near New Kundan Puri to strengthen the banks and machines were being used to remove the waste from the drain. Superintending Engineer Rajinder Singh said the nullah was about to overflow but they controlled the situation timely. Meanwhile, Mayor Balkar Singh Sandhu also inspected the areas and appreciated the efforts made by MC officials.

As the civic body officials failed to take concrete steps to avoid mishaps on roads where water drainage or sewer pipes were installed recently, four incidents of road cave-ins were reported today.

A tractor-trailer loaded with bricks got stuck after a portion of road caved-in on Old GT Road near Clock Tower while another incident took place on the same stretch near Reikhy Cinema Chowk when a tempo got stuck as a portion caved-in.

“The axle of the tempo broke down. Commuters and shopkeepers faced a lot of inconvenience due to the muddy conditions on the stretch, ” said Simranjit Singh, a shopkeeper.

A car got stuck after a portion caved in near BSNL Exchange at E Block of BRS Nagar this morning. Mahinder Singh Sekhon, a resident, said: “The civic body is responsible for the incident as no preventive steps were taken to ensure the safety of the public after installation of sewer pipes over a month ago.” Notably, no caution boards were installed and no barricading was put up to alert the commuters.