17 booked for lockdown violations in Ludhiana 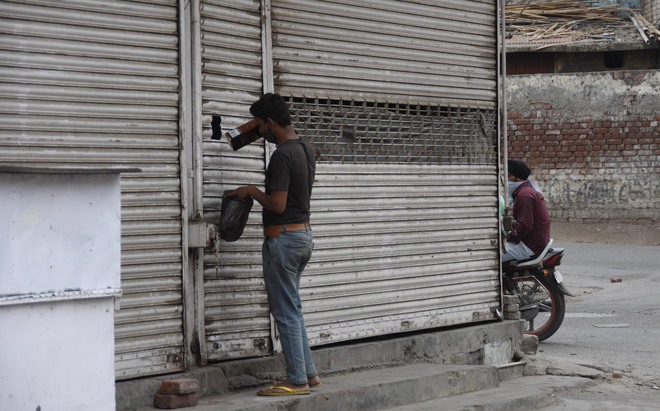 Despite lockdown, a vend sells liquor from a hole in the shutter at Field Gunj in Ludhiana on Saturday. Tribune photo: Himanshu Mahajan

The Ludhiana police continued action against lockdown violators and registered 14 cases against 17 persons.

The cases were registered by the police during the day-long drive against violators till late last night.

In one of the cases, the police booked Sonu Sonkar, who owns a gym in Shivpuri. The Daresi police in a surprise checking found the gym opened and over 24 persons were present. The case was registered as the district administration has closed gyms in the city due to Covid-19.

The Police Division 5 registered a case against the owner of a liquor vend, Panj Tara, as the vend was selling liquor to their customers through a small hole created in its shutter. The police also told customers, who came to buy liquor, to avoid visiting the vend in the future during the lockdown else an FIR will also be registered against them.

The Koom Kalan police arrested a couple on the charges of smugging illicit liquor during the night curfew. The arrested accused have been identified as Parvinder Singh and his wife Gurdeep Kaur of Katani Khurd. The police recovered 59 bottles of illicit liquor and also impounded their car. The police said the accused were on the way to deliver the liquor to their clients when the police stopped them and seized the liquor. The couple told the police that they wanted to grab this opportunity during the night curfew but were nabbed.

The Police Division 8 also booked a doctor who owns Chawla Clinic at Tagore Nagar, Block A, on the charges of violating the social distancing norms. A large number of people had gathered outside his clinic and during a surprise checking, the police found the violation.

Though shutters of liquor vends can be seen lying closed during the lockdown period due to the restrictions, employees remained inside the vends to attend customers. Whenever any person comes to buy liquor, he has to knock the shutter and liquor is delivered through a small hole created in the shutter. Some of the vends are selling liquor at exorbitant rates, citing the strictness of the police.