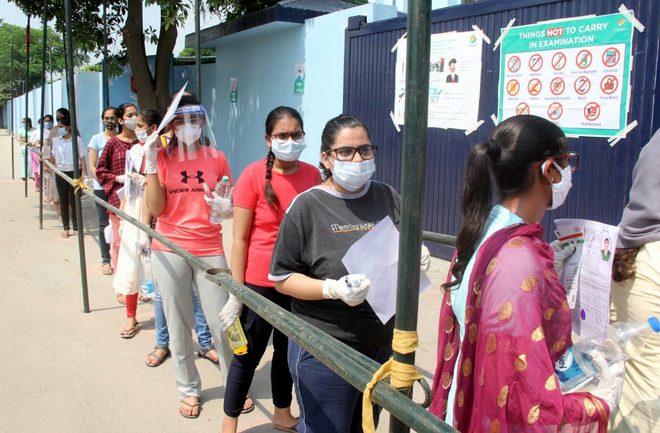 Today, 2,164 students appeared for National Eligibility-cum-Entrance Test (NEET) in the district. The test was conducted by National Testing Agency (NTA). As many as 402 students didn’t turn up for the test.

Huge rush of parents was seen outside the centres. Many were seen standing in the sun while the others were sitting in their cars. “A tent could have been put up so that parents could rest there for some time. Amid huge rush, it was difficult to maintain social distancing,” said a parent.

Amid the Covid pandemic, elaborate arrangements were made to ensure social distancing and safety of the students. However, there was no arrangement for the parents who accompanied the students. Some were seen waiting outside the centres in the scorching heat while the others were seen sitting in their cars. There was a huge crowd of parents and it was difficult to maintain social distancing.

The body temperature of all candidates and staff members was checked. Hand sanitisers, masks and gloves, apart from the admit card and ID card, were required to gain entry into the centre.

The exam is held for admissions to MBBS/BDS courses and other undergraduate medical courses.

Principal of BCM Arya Model Senior Secondary School Paramjeet Kaur, who was NTA coordinator for Ludhiana, said a total of 2,164 candidates appeared for the test today against the registered 2,566 students.

“The centres were located in far-flung areas where there was enough open space so that norm of social distancing can be adhered to, as parents also accompanied the candidates,” she said.