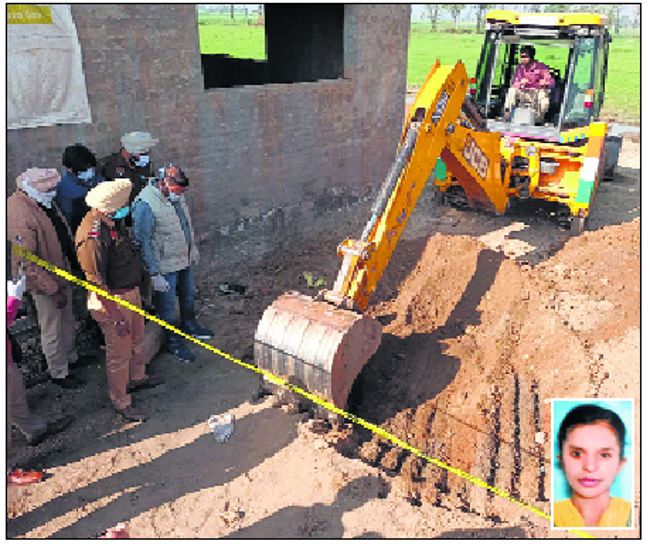 Police personnel try to excavate the body of Jaspinder Kaur (inset) from a stud farm using a JCB machine at Sudhar village.

The police claimed to have arrested four persons for the brutal murder of a girl of Rasulpur village who had been missing for a fortnight.

The accused tried to dump the body of the victim by throwing it into a canal. Later, they attempted to burn the body at a stud farm owned by Param Preet Singh.

Jaspinder Kaur (24), the deceased, had left her home on November 24 when all members of the family were away on their work.

On Monday, the Hathur police had registered an FIR under Sections 346 and 120-B of the IPC against Param Preet Singh and Bhawan Preet Singh for illegal detention of Jaspinder Kaur on the statement of her brother Shaminder Singh. Shaminder had alleged that Jaspinder had taken gold jewellery (120-gm) and Rs 20,000 in cash before leaving him with Param Preet Singh from her home. During the investigation, the police found that Jaspinder Kaur had been murdered and the accused had tried to destroy her body.

Though the police are yet to ascertain exact sequence of events and exact time and place of the murder, investigation revealed that the accused had attempted to destroy the body first by throwing in a canal and then burning with paddy stubble. Ultimately, the accused hired a JCB machine on the pretext of burying the body of a horse and buried the body of the deceased in the pit.

Having learnt about the burial of the body at the stud farm owned by Param Preet Singh, cops led by Raikot DSP Rachhpal Singh Dhindsa located the body on the basis of circumstantial evidence. Partially burnt body was got excavated and sent for post-mortem.