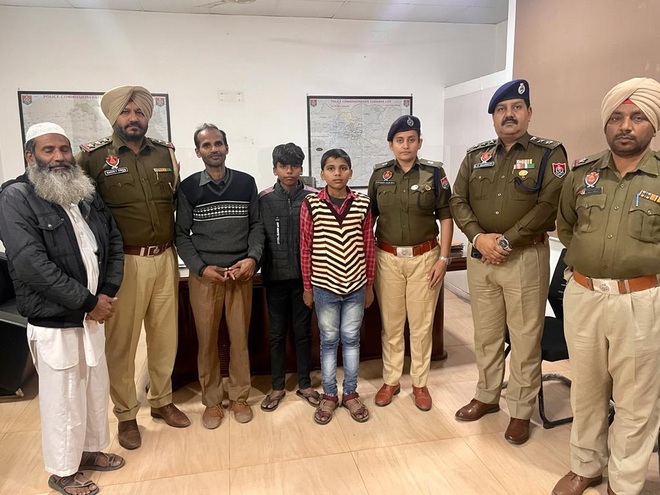 ADCP Rupinder Kaur Sra hands over the recovered boys to their families in Ludhiana on Saturday. Tribune photo

The city police recovered two minor boys who had gone missing under mysterious circumstances. Both the boys were good friends.

Additional DCP Rupinder Kaur Sra in a statement said on November 23, Anjali Mishra had filed a complaint that her son Utsav Kumar, who is student of Class VII, had gone to school but didn’t return home.

The same day, Nasim Ahmed lodged a complaint that his nephew Sawed Ahmed had also gone missing from the same school from where Utsav went missing.

Rupinder Kaur Sra said both boys were good friends and they had stolen Rs 4,000 from their house. First they went to Amritsar and then to Dehradun in public transport.

“Today we got a clue about the presence of the boys in Dehradun, immediately a police team was sent and boys were recovered. The boys were roaming in a market in Dehradun,” added ADCP Sra.

The boys were today handed over to their families.

Bhagwant Mann to contest Punjab poll from Dhuri in Sangrur