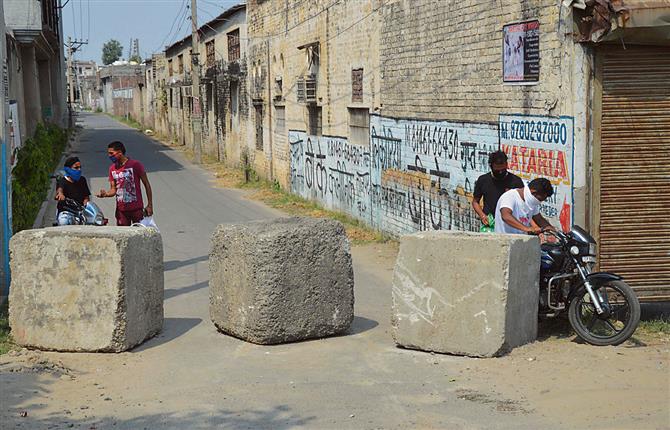 A road blocked in a containment zone of Ludhiana. Photo: Inderjeet verma

Two more persons from Ludhiana district died of Covid-19 today, taking the toll to 24. The district once again witnessed a surge in cases with 60 persons testing positive in a day.

One of the persons who lost his battle to Covid was a 62-year-old man from the Field Ganj area. He was admitted to the DMCH on June 27. He was also suffering from a coronary artery disease and had undergone coronary artery bypass grafting (CABG). He was also a type 2 diabetic, a frequent co-morbidity among patients undergoing CABG.

The other person who succumbed to Covid was a 68-year-old woman from a colony situated near bus stand in Ludhiana. She was admitted to the Fortis hospital, Mohali.

Biggest spike of 60 cases in a day

Four healthcare workers have tested positive. They include two women from private hospitals and a man from Dugri who worked as a billing supervisor in a private hospital.

Six persons with travel history also tested positive today. They are from Giaspura, Ram Nagar at Dholewal, Inder Nagar Jain Colony on Daba Road and from Manjit Nagar in Ludhiana.