Were planning to commit bank robberies in Amritsar, Chandigarh 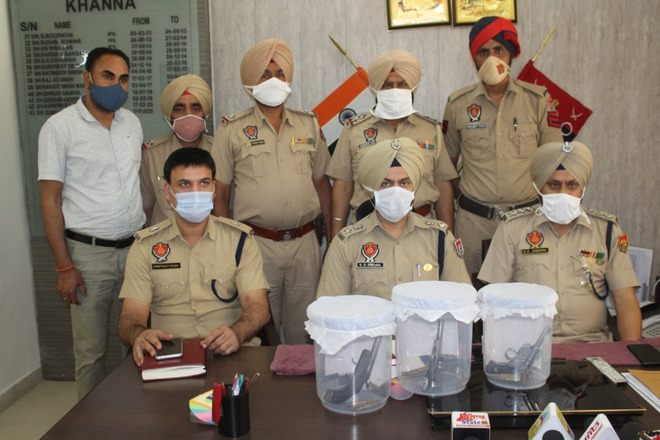 The Khanna police arrested two notorious criminals who were planning to commit major bank robberies in Amritsar and Chandigarh.

One of the nabbed accused is facing eight cases of robberies and snatching.

The duo have been identified as Jugraj Singh of Udham Singh Nagar, Uttarakhand and Harmanpreet Singh of Rampur in UP. The police also recovered three pistols of .315 bore, 13 live cartridges from the accused.

Khanna SSP Gursharandeep Singh Grewal said the Khanna police started a special campaign against gangsters and other notorious elements. The police had achieved a huge success.

The SSP said during initial investigation, it had come to light that Jugraj was a notorious criminal in his area and he was wanted in eight cases of robbery, Arms Act and snatching in various states.

Jugraj came out of Tihar Jail on parole but did not return. Jugraj had links with a person Balwinder Singh, alias Chacha from Haridwar. The duo had looted Rs 1,40,000 from a person on Khatima Road in Puranpur, UP, recently.

The SSP said Jugraj, along with Chacha, did a recce in Chandigarh to rob a bank and also had a plan to commit a similar crime in Delhi. Chacha sent Jugraj and Harmanpreet to Punjab with illegal weapons for execution of these plans. Afterwards, the duo were going to Amritsar with illegal weapons but were nabbed by the police.

The culprits are being questioned and there is a possibility of other major disclosures in the probe. — TNS