Work was stalled earlier this year but yet to be resumed, say residents 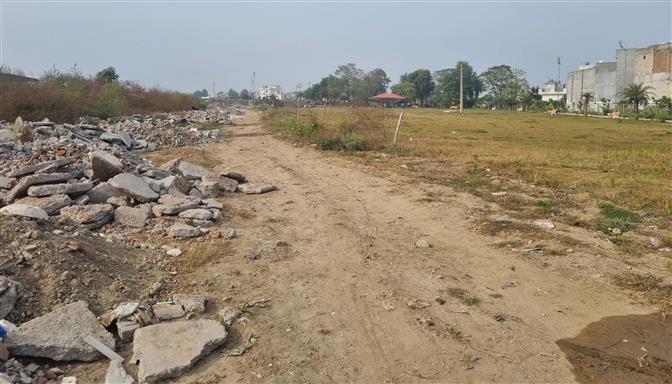 Even after passing of around 22 months, a project to develop Leisure Valley in Haibowal is still incomplete. The project work had been stalled there earlier this year. Now, the construction waste is being dumped at the project site in the absence of any check by the department concerned, residents said.

On January 25, 2021, the then Cabinet Minister Sukhbinder Singh Sarkaria laid the foundation stone of Leisure Valley on 6 acres in Haibowal. The valley was to be developed on a vacant piece of land along the Buddha Nullah by the Ludhiana Improvement Trust (LIT) with an estimated cost of Rs 2.96 crore.

It was then announced that it would have lush green lawns and shady trees, a dedicated footpath for morning/evening walks, an open gym, kids’ playing area, canopies for sitting, benches, tube well for water supply, modern lighting, besides other such amenities. However, residents of the nearby area complained that the Leisure Valley site is in a shambles now and the project is still incomplete.

A resident of Bank Colony, located near Leisure Valley, Pawan Kumar Sharma, said the project work was stalled earlier this year and it had not been resumed. The boundary wall was not constructed but a lot of construction waste had been dumped there.

“The project has already missed its deadline. Several works, including the construction of a retaining wall, are pending. The work at the entrance of Leisure Valley is also incomplete. Many saplings, which were supposed to be planted in Leisure Valley, have also dried as the LIT authorities failed to pay any attention to the same. The damaged saplings are lying inside the valley,” he said.

Sharma said: “Also, nobody looks after works which have already been done at the site. There is no maintenance of the lawn area and there is no provision for cleanliness.”

A Haibowal resident said the project to develop Leisure Valley here was started with much fanfare but there was no information as to why the project was delayed. “When a huge amount of money is being spent on the project, remaining works must be completed at the earliest. Staff should be deployed for maintenance of the valley,” he said.

Congress councillor Maharaj Singh Raji said LIT officials who were handling the project were facing Vigilance action. Meanwhile, the project work was stalled at the site. When Bharat Bhushan Ashu was a cabinet minister during the regime of the previous government, he often used to visit the project site but no AAP MLA pays any attention towards the project now, Raji said. LIT Executive Engineer Inderpal Singh said if construction waste was dumped there, he would look into the matter.

He said the project work was stalled there. However, he would not make any more comment regarding the project.

Stone laid in Jan 2021 by minister

On January 25, 2021, the then Cabinet Minister Sukhbinder Singh Sarkaria laid the foundation stone of Leisure Valley on 6 acres in Haibowal. The valley was to be developed on a vacant piece of land along the Buddha Nullah by the Ludhiana Improvement Trust (LIT) with an estimated cost of Rs 2.96 crore.