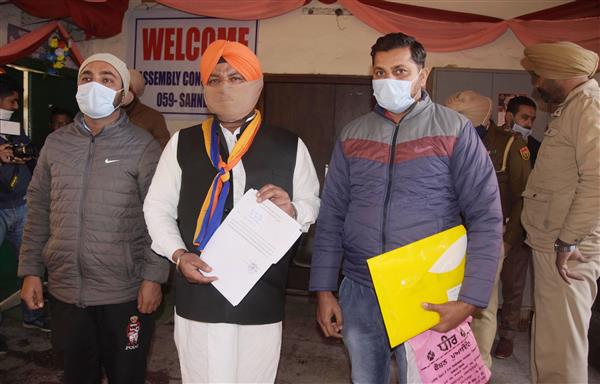 For the upcoming Assembly elections to be held on February 20, 25 candidates from eight Assembly constituencies filed their nomination papers today, on the third day of filing nominations.

Sharanjit Singh Dhillon and Pawandeep Kaur from the Shiromani Akali Dal (SAD) filed their papers from Sahnewal. Dhillon is the sitting MLA from Sahnewal.

Besides, Sanjeev Talwar and Kunwar Talwar from the Indian National Congress filed nominations from Ludhiana East. Sanjeev Talwar (also known as Sanjay Talwar) is the sitting MLA from the constituency.

Meanwhile, Sumit Kumar of ‘Right to Recall Party’ filed his papers from the Ludhiana South constituency.

Manwinder Singh and Ramanjit Kaur from the Aam Aadmi Party while Lakhvir Singh from the Peoples Party of India (Democratic) filed their nomination papers from Payal.

SR Kaler and Ranbir Kaur Kaler from the SAD filed their nominations from Jagraon. SR Kaler is a former MLA from Jagraon.

The papers will be scrutinised on February 2. The date of withdrawal of candidature has been fixed as February 4. The election date in Punjab has been fixed for February 20 while counting of votes will be conducted on March 10.