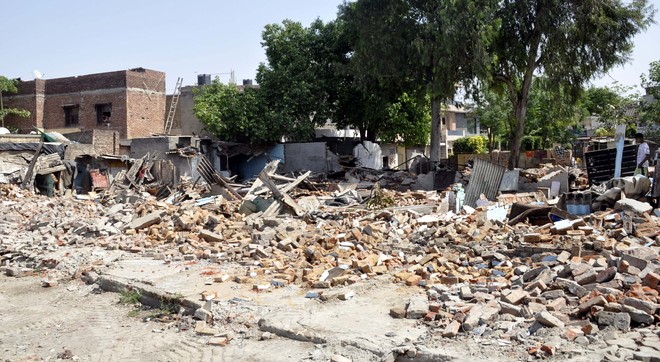 The New Model Town area after the removal of encroachments in Ludhiana. Ashwani Dhiman

The Municipal Corporation on Wednesday removed around 25 encroachments in shape of permanent constructions near railway lines in the New Model Town area in Zone D. It also demolished a number of quarters that were given on rent.

MC officials said these quarters were constructed on a piece of encroached land. But, a Congress leader Kulwant Singh Sidhu has raised questions over the MC’s action as he claimed that the MC demolished quarters constructed on ‘his’ land.

Kulwant Singh Sidhu claimed that he had purchased the land, where quarters were constructed, at a cost of Rs 80 lakh around eight years ago.

Sidhu said, “Without giving any prior notice, the MC took this action. The MC authorities should show the documents that this land belongs to the corporation. I had purchased the land. If the MC failed to produce land documents, I will move the court against it.”

People living in quarters claimed that they were not given any prior intimation about the demolition drive. They said they used to pay rent for staying in the quarters. Meanwhile, questions were also raised over the MC officials as action was not taken against a few other ‘illegal’ constructions.

The drive was jointly carried out by the MC’s building branch teams of all the four zones. Assistant Town Planner, MS Bedi said the drive remained peaceful. He said the encroachments were raised upon a greenbelt area and they removed them today. “We had served notice on the encroachers a month ago but they had not vacated the land. Thus, we removed encroachments today,” he said. — TNS