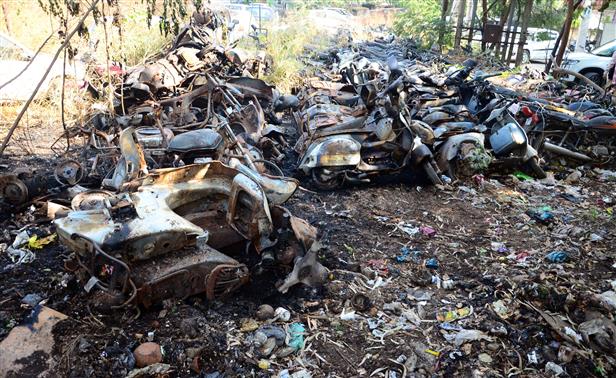 Vehicles that caught fire opposite the Police Division 8 in Ludhiana on Saturday. Himanshu Mahajan

As many as 25 vehicles (two-wheelers) were gutted.

The police have launched a probe to identify the cause of the fire. The police are also suspecting that the fire could be the handiwork of some miscreants.

As per information, the incident took place at around 5.30 am when food vend owners near the police station noticed flames. They immediately raised the alarm and also informed police officials present at the police station.

Initially, the police had tried to douse the flames by pouring water. Later, the fire brigade was called and fire tenders reached the spot.

Police Division 8 SHO Neeraj Chaudhary said after the police came to know about the incident, the fire brigade was called in and the outbreak was controlled within minutes. Around 25 vehicles (two-wheelers) seized in different crimes were gutted in the flames. A police probe is on to find the reason for the fire.

Not an isolated case

Most police stations have dumped case properties, turning their premises into a junkyard It is not an isolated case for Police Division 8. In fact, a majority of the police stations in the Commissionerate have dumped case properties on the road. Thieves target even these vehicles and steal their parts as the police cannot keep eye on such vehicles.

As per information, more than 4,000 vehicles, including two-wheelers and four-wheelers, are rotting at various police stations and on roads of Ludhiana. Interestingly, the impounded vehicles have turned police stations into a junkyard, as there is no provision for their upkeep. The stations also do not have any separate yards. Such vehicles are often damaged beyond repair and recognition. Their windscreens are shattered, doors unhinged, tyres punctured and steering wheels broken. Over time, they get reduced to mere scrap. Police officials say owners of these vehicles usually don’t come to claim them because either they do not have required documents or the vehicles are very old or sometimes they have already taken claim from the insurance companies in lieu of the them.

As per information, more than 4,000 vehicles, including two-wheelers and four-wheelers, are rotting at various police stations and on roads of Ludhiana.