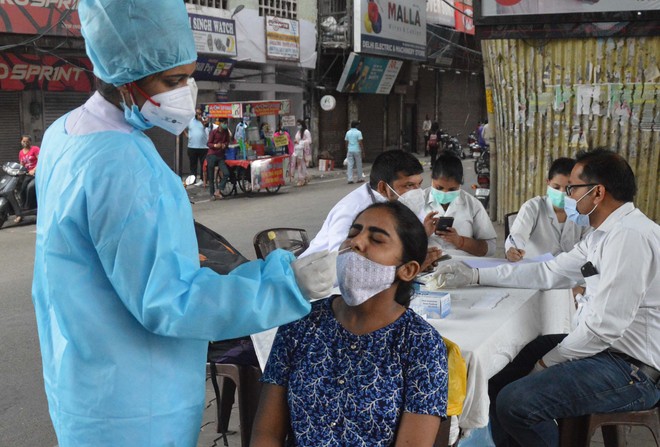 A girl gives her sample for Covid test in Ludhiana. Inderjeet verma

Covid-19 has claimed the lives of 28 more persons in the district during the past 24 hours. The Health Department on Wednesday confirmed 1,215 fresh cases from the district and 126 from other districts or states. There are 12,278 active cases that belong to Ludhiana district at present.

Of the 1,215 fresh cases in Ludhiana, 84 persons came in contact with positive patients, 182 visited the OPD and 669 with influenza-like illness visited the Flu Corner. Besides, 11 persons with a severe acute respiratory infection, seven healthcare workers, three undertrials, and three others tested positive for the virus. The process was underway to trace 256 persons, who have also tested positive.

The Ludhiana Civil Surgeon said 28 persons from Ludhiana, three from Sangrur, two from Moga, two from Barnala and one each from Fatehgarh Sahib and Hoshiarpur died of the virus.

As many as 13,006 samples were collected today. At present, 64 patients, including 44 from Ludhiana and 20 from other districts or states, are on ventilator support.

Expressing serious concern over the alarming rate of deaths in Ludhiana due to the pandemic, Deputy Commissioner Varinder Kumar Sharma on Wednesday said 168 persons have lost their lives in the past seven days, 24 deaths per day in Ludhiana and blamed casual and careless behaviour of some people are contributing to rapid surge in cases.

Interacting with people in his weekly Facebook live session on the official page of the DPRO, Ludhiana, the Deputy Commissioner said those people who were still not obeying the Covid appropriate behaviour must think about the families of 168 persons, who died from May 7 to May 12.

“I am really worried and pained over the crowding of some people during relaxation timings in Ludhiana”, Sharma said, adding this irresponsibility had been proving fatal for others.

The DC said: “All of us should learn from history, especially the time of the outbreak of Spanish flu and plague 100 years ago and how our forefathers maintained isolation during their toughest time and we are alive due to their seriousness towards guidelines of governments during that period.”

He said: “Now we all must ensure meticulous adoption of proper isolation in our daily routine to contain the surge and secure the future.”