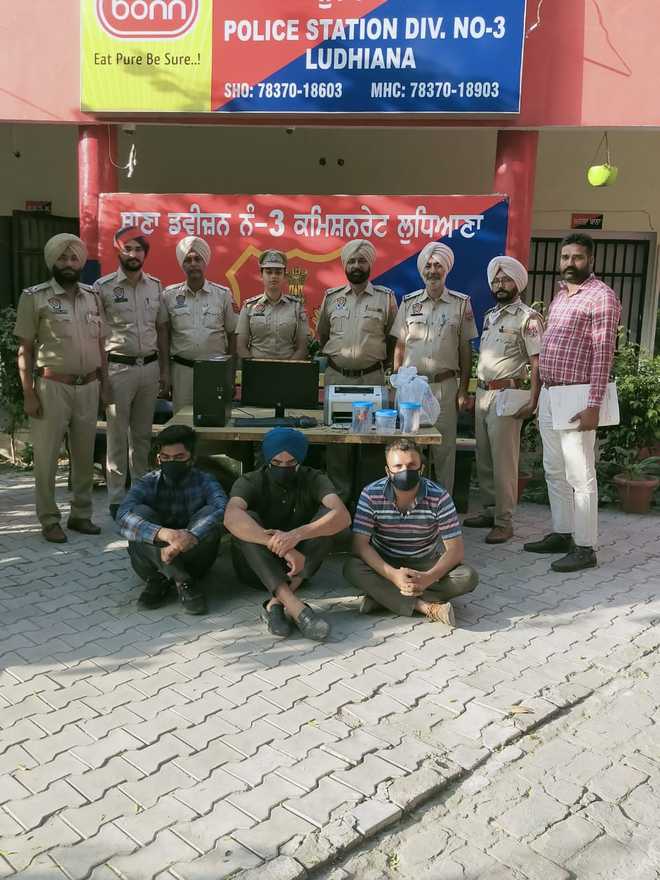 The three engineers who tried to loot a hosiery owner’s house in police net in Ludhiana on Tuesday.

Three persons posing as officials of the Income Tax Department yesterday barged into the house of hosiery owner at Shivaji Nagar and attempted to commit loot. The alert family and area people managed to nab two, while one was arrested today by the police.

A case under Sections 379B (snatching), 419 (cheating by impersonation), 171 (wearing garb or carrying token used by public servant with fraudulent intent) and 451 (house trespass) of the IPC has been registered against the three accused last night. The accused had snatched a bag containing Rs 5,000.

The accused have been identified as Shamsher Singh Sona and Gurpreet Singh of Banga Wali, Sangrur, and Prince Goyal of Sangrur.

The accused had barged into the house of hosiery owner Inderpal Singh, where his wife, mother and daughter were present. The accused showed a fake IT notice to the woman and entered the house. When family members suspected some foul play they raised an alarm.

The accused then left the house and started running. Family members and area people managed to nab two accused. They were handed over to the police yesterday and one accused was today nabbed by the police.

The SHO, Police Division No 3, Madhu Bala, said all the accused were mechanical engineer in some private firm in Sangrur and due to financial issues, the trio decided to commit loot by posing themselves as IT officials.

“The accused had got inspiration to commit such a crime by watching Bollywood movies in which fake IT or CBI officials loot people. This was their first attempt but they remained unsuccessful. They have no criminal background,” added SHO Madhu.