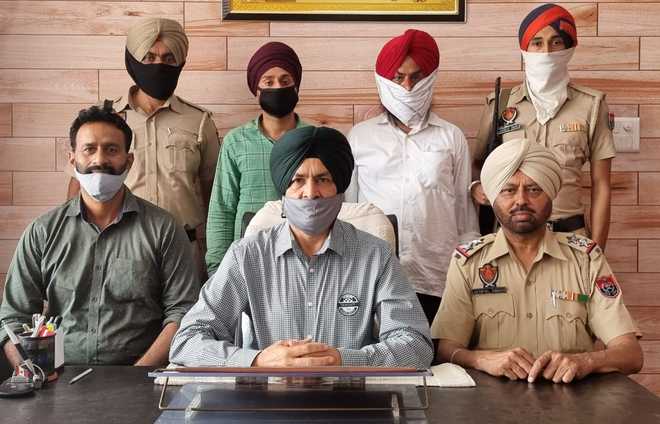 STF Inspector Harbans Singh with the accused in Ludhiana.

The Special Task Force (STF) of the city police have nabbed three drug smugglers and recovered 819 gm of heroin and Rs4.9 lakh drug money from their possession in two separate cases.

Inspector Harbans Singh, in-charge, STF, said a secret information was received that the accused were into the notorious trade of drug smuggling and were on their way to Ferozepur from Tarn Taran to deliver a huge quantity of heroin to their clients.

A naka was laid where the accused, who were travelling in a car, were intercepted. During search of the car, 410-gm of heroin and Rs4.90 lakh was recovered.

Inspector said both the accused had a notorious past as they were already facing 10 cases of drug smuggling, attempt to murder among others. Over 40 kg of heroin had already been recovered from the accused in the past, he added. Both the accused had spent considerable time in jail and come out and started the illegal trade recently, he said.

In the second case, the STF nabbed Sanjay Chawla alias Sanju, a resident of Janta Nagar, and recovered 409 gm of heroin from him, the inspector said. Chawla was nabbed from Janta Nagar, he added. The accused was a driver in a printing press and himself a drug addict, he said. About two years ago he started the illegal trade, he added. In both cases, the police remand of the accused would be sought from court, he said.