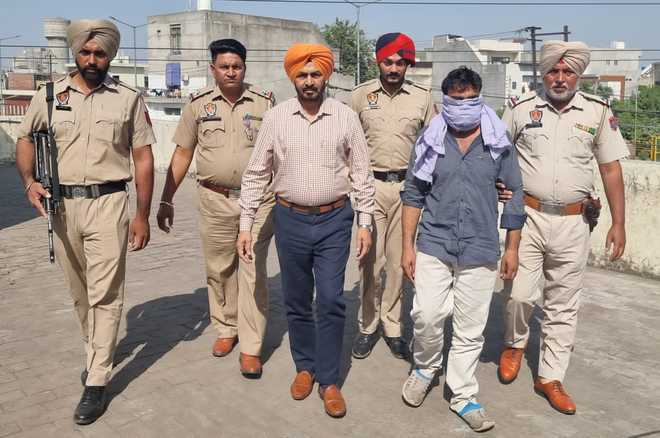 A heroin smuggler in Special Task Force net in Ludhiana on Friday.

The Special Task Force nabbed three smugglers and recovered 2.55 kg of heroin, 5 kg of opium, Rs 66,500 drug money and a Maruti Dzire car from them.

The arrested smugglers have been identified as Madur Gupta (23) of Uttar Pradesh, Mangat Singh (55) of Satjot Nagar and Satinder Singh (57) of Phase-I, Dugri. A case under the NDPS Act was been registered against them yesterday.

The STF, Ludhiana, in-charge, Inspector Harbans Singh, said initially on October 18, the STF had arrested Mangat from Moti Nagar and recovered 1.05 kg of heroin, 1.5 kg of opium and Rs 14,500 drug money from him.

Madhur had also written ‘Crime Intelligence Force’ on his Dzire car to give impression of police vehicle.

Madhur in his interrogation revealed that he is a B.Com student at Rohilkhand University, Uttar Pradesh, and he has been into smuggling for over two years. Even his father is a notorious smuggler.

Inspector Harbans said a Satinder and Mangat were sent to judicial custody, while Madhur is on three-day police remand.