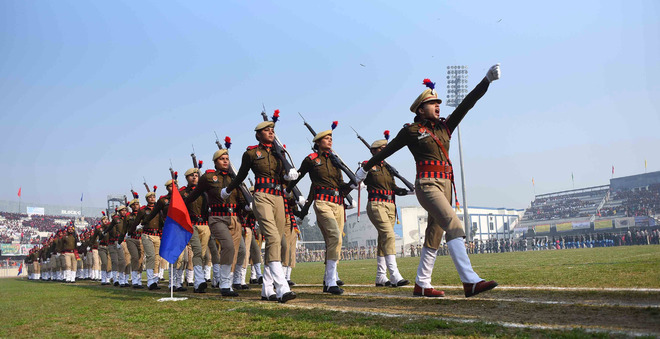 Police personnel take part in a march past during the Republic Day function in Ludhiana on Sunday. Tribune Photos: Himanshu Mahajan

The ambitious plan of deployment of ‘traffic marshals’ on a voluntary basis along with the traffic police on the busy roads and intersections to assist them in regulating the traffic was rolled out during the Republic Day celebrations in the city yesterday. Punjab Minister for Social Security, Women and Child Development Aruna Chaudhary flagged off the first batch of 300 traffic marshals for deployment.

According to Commissioner of Police Rakesh Agrawal, the volunteers, now designated as traffic marshals, were duly trained in traffic regulation and to effectively deal with traffic jams. They trained at the Police Lines under experts from Traffic Education Cell and senior officials of the traffic police.

the Commissioner of Police said he had also interacted with the ‘traffic marshals’ and given them several tips on handling the task of traffic regulation.

The brainchild of the CP, the traffic marshal programme has been launched in the city with the objective of seeking people’s participation in the gigantic task of traffic regulation. “The scheme is intended to promoting people’s involvement in regulation of traffic with a view to ensuring smooth movement of vehicular traffic and to inculcating road sense in the public, especially pedestrians,” said Agrawal.

He said though not authorised to issue proper challans for violation of traffic rules, the traffic marshals would carry dummy challan books and they will have the powers to issue dummy challans, where there would be no monetary fines. However, traffic violators will be required to perform traffic duty for up to 8 hours as decided by the traffic committee as a mark of service to society.