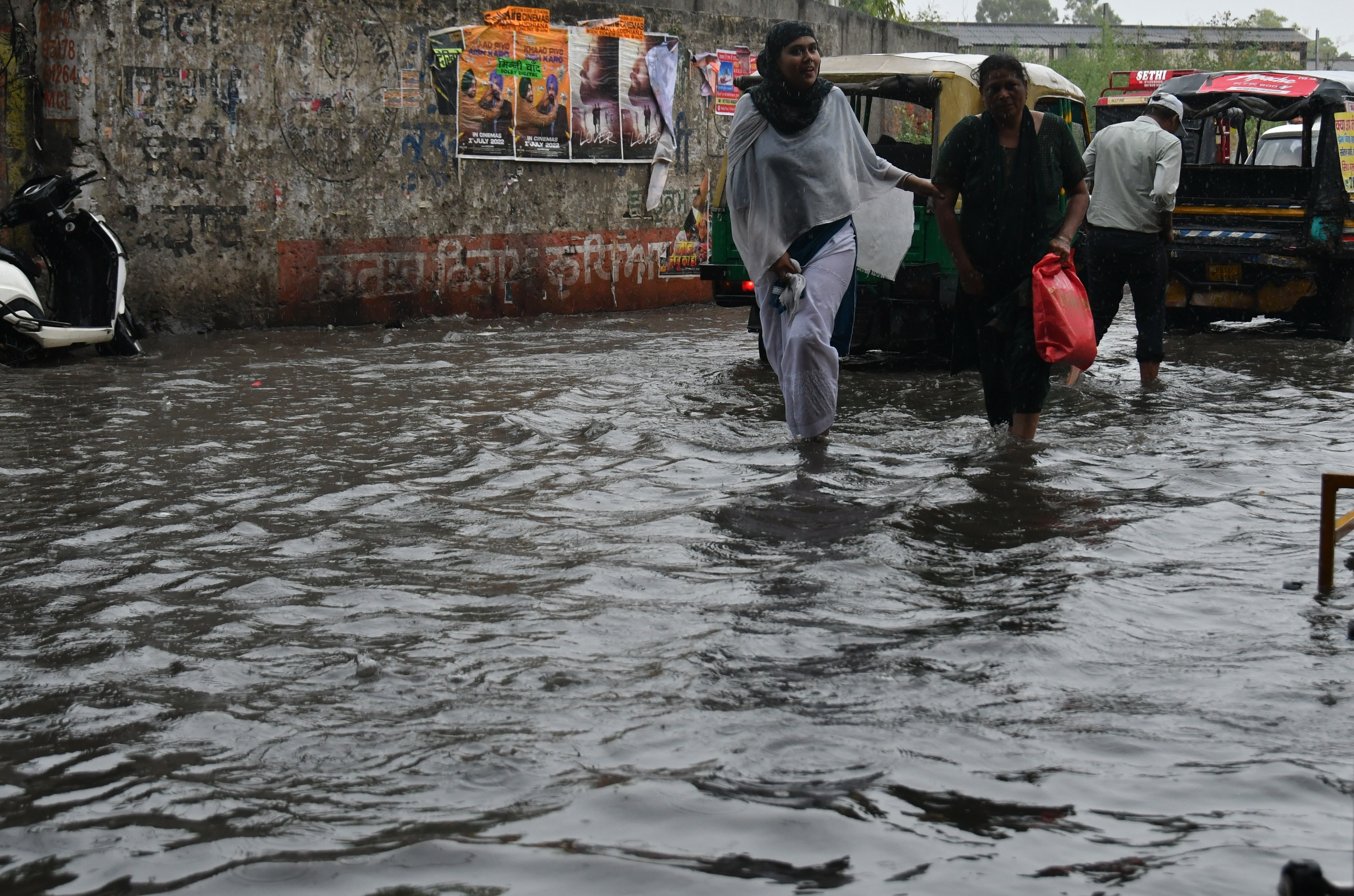 Pedestrians wade through a waterlogged road in Ludhiana on Monday. photo: Ashwani Dhiman

Rain that lashed the city on Monday inundated roads in various parts of the city, exposing the Municipal Corporation’s claims regarding monsoon preparations. The School of Climate Change and Agricultural Meteorology, PAU, Ludhiana, recorded 34.4 mm of rainfall in the city.

The MC has failed to fix the drainage system on Elevated Road due to which the rainwater fell directly on commuters passing through Old GT Road. Besides, rainwater also accumulated on an underpass that is a part of the Southern Bypass project near Verka Milk Plant, here.

Commuters faced inconvenience on waterlogged roads of the city while some vehicles while passing through such roads also developed snags and got stuck. As per information, waterlogging was witnessed on Hambran Road, Old GT Road, RK Road, Miller Ganj, Link Road, Ferozepur Road, Transport Nagar, Samrala Chowk, Dhandari, Haibowal, Chandigarh Road, at Sabun Bazaar, in old city areas, near MC’s Zone A office and other areas.

The residents said a major waterlogging occurred on roads in Hargobind Nagar.

The civic body had spent lakhs of rupees on the instalation of the storm water drainage system near Clock Tower last year but rainwater got accumulated there today for sometime, leaving shopkeepers and commuters in the lurch.

A shopkeeper said it seems road gullies had got choked but MC employees later reached and cleaned the road gullies. After the rain stopped, water got drained out in around 10 minutes.

The MC has failed to fix the drainage system on Elevated Road due to which the rainwater fell directly on commuters passing through Old GT Road. Besides, rainwater also accumulated on an underpass that is a part of the Southern Bypass project near Verka Milk Plant, here.

As the civic body failed to take necessary measures, sewers badly overflowed on Panj Peer Road again. Commuters faced inconvenience while passing through the flooded stretch. Residents have raised the issue many times but to no avail.

Baljeet Singh, president of ‘AAP Kee’, an NGO, said the MC needs to take the matter of waterlogging seriously. Waterlogging is a major problem in the city during the rainy season but the civic body had failed to take any concrete steps in this regard.

A former councillor, Inder Aggarwal, said a number of MC sewer men were observing strikes these days due to which the work was getting affected. The authorities should resolve their issues so that they could carry out necessary works to avoid waterlogging during rainy days.