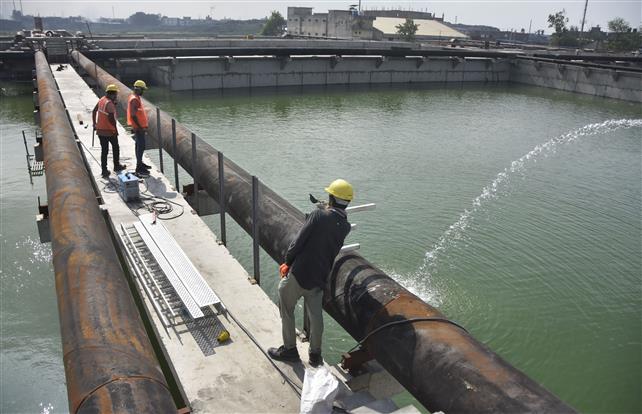 Work to rejuvenate the Buddha Nullah in progress. Ashwani Dhiman

Almost 35 per cent of the total awarded amount has been spent to achieve around 55 per cent work to rejuvenate the highly-polluted Buddha Nullah, a seasonal tributary of the Sutlej, in Ludhiana, the government has confirmed.

The nomenclature Buddha Nullah will be replaced with the Buddha Dariya (river) after achieving zero discharge of sewage and effluents flowing into the Sutlej tributary since ages. The ongoing work will be completed at the earliest to ensure that only treated or fresh/storm water may flow into the Buddha Nullah. — Bhagwant Mann, Chief Minister

Since the ambitious Rs 840-crore project had faced teething problems and had got adversely hit due to the Covid restrictions during the initial months last year, the deadline to complete the capital work has been further extended to June next year, the officials have said.

Municipal Corporation (MC) Commissioner Shena Aggarwal, told The Tribune here on Monday that the rejuvenation project, aimed at giving a new lease of life to one of the most polluted nullahs, which runs almost parallel to the Sutlej through most of Ludhiana district, including 14-km in Ludhiana city, before merging with the Sutlej, had been taken up on a priority basis.

She said the pace of the ongoing work on the project had been further expedited to cover up the initial delay, following which almost 55 per cent of the total work had already been completed.

The development assumes significance as only 11 per cent progress was achieved in the first eight months till July 2021. After starting the work on December 2, 2020, and another 11 per cent work progress was achieved within the next three months from August till October 2021, while another 33 per cent work has been completed within the next less than nine months so far, which shows that the work on the project was being undertaken on a war footing.

Divulging the operational progress of the project, MC Additional Commissioner, Aditya Dachalwal, said an amount of Rs 296.51 crore had already been spent on the project.

While the project amount as per detailed project report (DPR) was Rs 650 crore, the work was awarded at Rs 839.79 crore.

Though the ongoing work was yet to meet the target pace, the gap between the target and achievement had been narrowed down, which was likely to be met shortly.

The work, which was awarded to a Mumbai-based joint venture group at the capital cost of Rs 519 crore besides the operation and maintenance cost of Rs 321 crore, was initially scheduled to be completed by December 1, 2022, but the deadline has been extended thrice from December 2022 to March 2023, then May 2023 and now June 30, 2023.

Under the project, the scope of work included construction on two new sewage treatment plants (STPs) of 225 MLD and 60 MLD each at Jamalpur and Balloke, respectively, six new intermediate pumping stations (IPS) on the banks of the Buddha Nullah to divert the wastewater, laying pipeline along the nullah banks to carry waste water from IPS to respective STP, two effluent treatment plants (ETPs) of 2.25 MLD and 3.75 MLD capacity each for handling waste water flow from dairy complexes on Tajpur road and at Haibowal, rehabilitation of two existing STPs of 111 MLD and 152 MLD on the UASB technology at Bhattian and Balloke, respectively, one-time repair and overhauling of existing two STPs of 50 MLD and 105 MLD-based on SBR technology at Bhattian and Balloke, besides operation and maintenance of all these components for 10 years after construction and 21 months during the construction period.

As of date, the work on 225 MLD new STP, six ILPs, pipeline, rehabilitation of existing 111 MLD STP, repair and overhauling of 50 MLD STP, and 105 MLD STP was in the advanced stage of completion.

The project was launched by the then Capt Amarinder Singh government to check the existing 625 MLD untreated domestic waste water discharged directly into the nullah and the future discharge, if any.