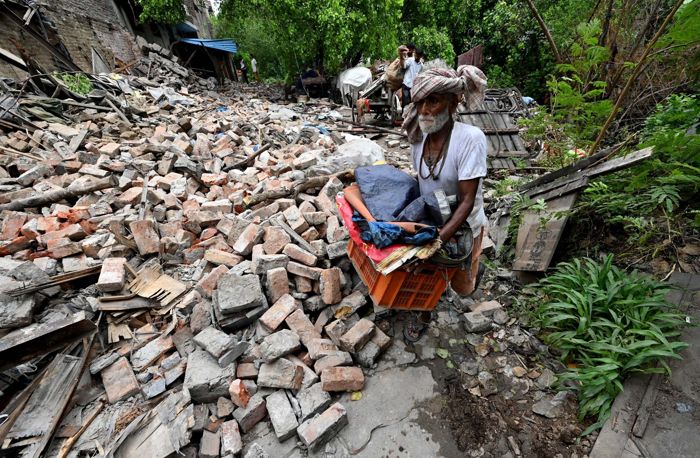 A man collects his items after the anti-encroachment drive along the Buddha Nullah. Himanshu Mahajan

The encroachments were in the shape of illegally extended factory portions, residential quarters, etc. However, there are two encroachments that are part of religious structures but the MC is yet to take any action in this regard.

When the civic body team along with police force reached the spot to carry out the anti-encroachment drive this morning, some people opposed the drive. However, the situation was controlled after which the MC continued the drive.

Migrant labourers, who were living in rented accommodation in the quarters, accused the civic body of not serving them any demolition notice prior to the drive.

Some articles were damaged during the demolition. If the civic body had informed them earlier, they could make required arrangements to shift their items to another place, they said.

MC’s Senior Town Planner SS Bindra said the civic body removed around 36 encroachments today. He said a man had opposed the demolition drive but the situation was controlled.

Bindra said the matter regarding encroachments that were part of religious places would be taken up with the managements concerned.

After getting the land vacated, the civic body will install a sewerage line under the Rs 650-crore Rejuvenation of Buddha Nullah project. It has planned to construct a road along the nullah.

The Municipal Corporation had earlier got a survey done to identify encroachments on the banks of the nullah. Around 965 encroachments along the nullah were identified in the jurisdiction of the MC.

A few encroachments yet to be removed

The razed encroachments were in the shape of illegally extended factory portions, residential quarters, etc. However, there are two encroachments that are part of religious structures but the civic body is yet to take any action in this regard.