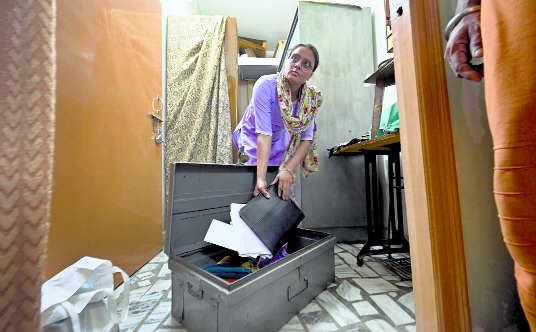 Four armed robbers barged into a house on the Daba-Lohara road on the intervening night of Wednesday and Thursday and held occupants of the house captive at gunpoint. After breaking open the main entrance door leading to the first floor of the house, they took away Rs 5.75 lakh in cash, 12 tola gold ornaments, property documents and a Maruti Swift Dzire car. The incident occurred at around 1.30 am.

Owner of the house Harjinder Kaur said her husband Jinderpal Singh passed away about two months ago while her two sons were staying in Canada. Yesterday, her father-in-law Kartar Singh and mother-in-law Daljit Kaur went to Canada.

On Wednesday evening, her father Surjit Singh, mother Amarjit Kaur and sister Kuldeep Kaur had come to meet her. They had come to handover about Rs 5 lakh to her, which was given by a person to whom agricultural land was given on a contract at Bathinda. On Wednesday night, they all slept in a room. At around 1.30 am, they heard some noise outside the house. After which, four armed persons barged into the house.

“Since we stay on the first floor, the robbers came up and forcibly broke open the main entrance door. The masked miscreants were carrying arms and sharp weapons. They tied our hands with a rope and tape and held us captive in a room. Afterwards, they ransacked the entire house and took away cash and gold ornaments. They also took away our Swift Dzire car. The robbers stayed in the house for around 90 minutes,” Harjinder Kaur said.

CCTV cameras were also installed in the house. Robbers also took the DVR with them.

Before fleeing the spot, they locked all of the victims in a room. At around 4 am, they raised an alarm after which neighbours arrived and freed them, the woman said.

In the afternoon, the police recovered the car from the Ayali road, South City.

Sources said after abandoning the car on the Ayali road, the robbers had left the place in another car, reportedly a Volkswagen. The police had got a CCTV footage of the vehicle.

Loot, dacoity are a routine in city

Incidents of firing, loot, robbery and theft have become a matter of routine in the industrial hub. April and May have witnessed major incidents, including a loot of Rs 40 lakh from an oil trading firm in the old city, Rs 15 lakh loot at gunpoint from Fahrenheit Clothing India Focal Point, Rs 4.39 lakh loot at gunpoint from Fino Payment Bank, Sherpur Chowk, theft of cash and valuables worth over Rs 24 lakh from ex-AIG Kamaljit Singh’s house by Nepalese servants, Rs 25 lakh theft from garment shops in Sundar Nagar and double murder of retired IT officer and his wife in BRS Nagar, besides other heinous crimes.