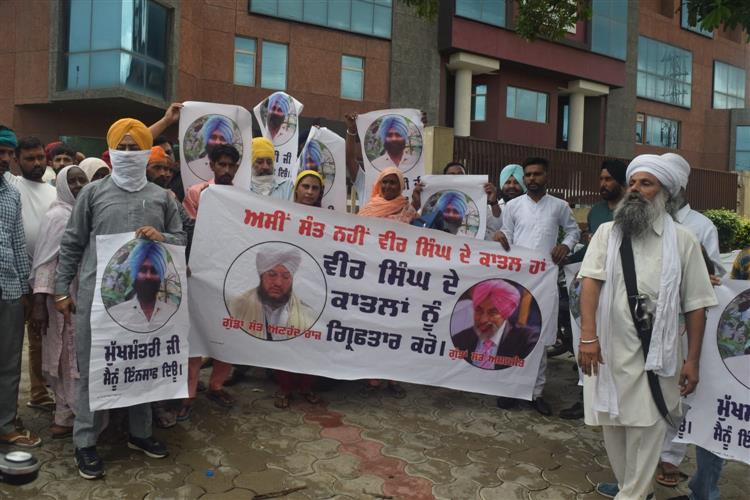 Kin of the deceased hold a protest in Ludhiana on Sunday. Tribune photo: Himanshu Mahajan

The body of a 40-year-old man, Veer Singh, working as a warden at Baba Jaswant Singh Dental College, here, was found in the institute’s water tank yesterday night.

College students and kin of the deceased have termed the incident a case of murder. They levelled allegations against the college management and demanded a probe into the matter.

As per information, the deceased had been working at the college for a long time and had been staying in a quarter allotted to him on its premises. On Saturday night, he joined duty at 8 pm but went missing after some time.

When college staff were looking for him, they found a pair of slippers on the rooftop. When the deceased’s son was called, he recognised the footwear as his father’s. Since the slippers were found near the water tank, the staff then checked the tank and found Veer’s body in it.

Meanwhile on Sunday, students of the college gathered and put up several social media posts in which they termed the death of Veer a murder mystery and levelled allegations against the college management.

On Sunday evening, the family also held a protest outside the college campus.

The college management also addressed the media on Sunday and offered full support to the family of the deceased. “We want the police to probe the matter seriously and the truth should come out,” management officials said.

Moti Nagar SHO Sanjiv Kapoor said inquest proceedings under Section 174 of the CrPC had been initiated and further proceedings would be initiated as per law after the arrival of the autopsy report.

After the incident, the college management addressed mediapersons on Sunday and offered full support to the family of the deceased warden. “We want police to probe the matter seriously and the truth should come out,” the members of the management said.