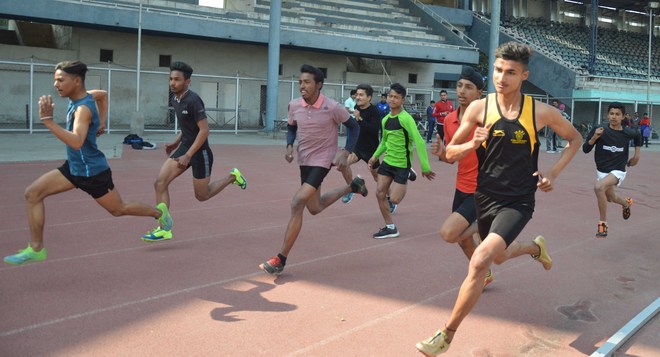 Players during the sports trials in Ludhiana on Wednesday. Photo: Inderjeet Verma

As many as 442 players (boys and girls) turned up for the selection trials conducted by the Punjab Sports Department here today. These aspirants attended the trials for registration in sports wings being run at different schools across the Ludhiana district.

The DSO informed that maximum number of players 60 (31 boys and 29 girls) reported for trials in judo, followed by archery in which 53 players (27 boys and 26 girls) were registered. Volleyball, gymnastics and handball received 43, 42and 39 aspirants, respectively. Three disciplines namely basketball, football and rifle shooting did not get any aspirant.

The players in these three sports disciplines might have missed the trials because of exams, said the DSO.

“The selected players will be enrolled in the sports wings as per seats available who will be given Rs 100 per player daily and Rs 200 to each player per day as diet money, besides free coaching under the sports promotion policy,” he added.