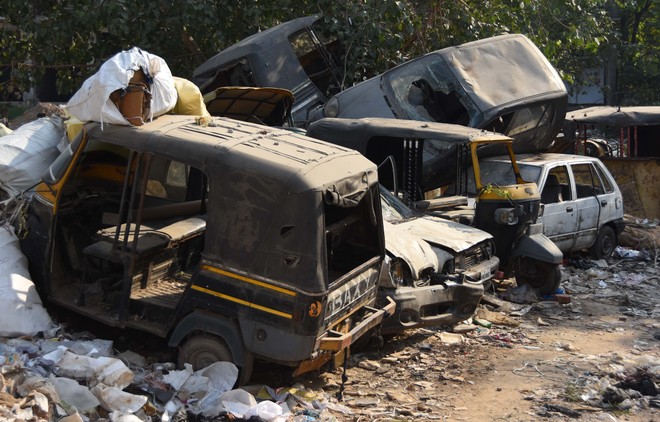 The Ludhiana police are soon set to dispose of hundreds of vehicles and other items, involved in criminal or other cases, lying at various police stations here.

Those interested to know about their vehicles or items can contact the Ludhiana police in this regard.

As per information, more than 4,000 vehicles, including two-wheelers and four-wheelers, are rotting at various police stations of Ludhiana.

Some vehicles have been damaged beyond repair and recognition. Their windscreens are shattered, doors unhinged, tyres punctured and steering wheels broken. Over a period of time, these get reduced to scrap.

“There are around 4,000 vehicles and other items lying at police stations as case property. We contacted all their owners and also took court orders to release these and will be returning these on October 30 at 11 am on ‘supurdari’. We also request the owners of such vehicles and mobiles phones lying in police stations to immediately contact us,” said Police Commissioner Rakesh Agrawal on Tuesday.

Agrawal said the police would be returning two-wheelers, four-wheelers, mobile phones, gold items and other items which were lying as case properties at the police stations.

He said sometimes people don’t come to take back their vehicles as either they do not have any documents or the vehicle is very old or sometimes they have already taken claim from insurance companies. In such cases, the police would be auctioning them on November 3.

“We are also helping parties through advocates and even asking them not to charge them anything for making applications for court orders. We will hand over maximum vehicles and other case properties to the original owners.”

Many people do not turn up to claim vehicles seized in cases of traffic violations, dowry, theft etc, considering that the legal cost of taking the possession of a vehicle was more than its market value.