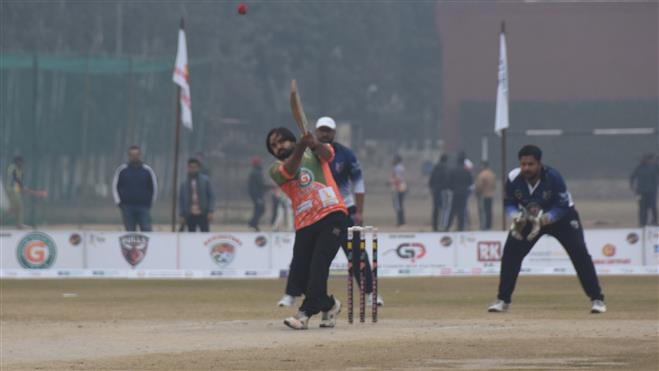 A match in progress during the 4th RJPL Rasham Cricket League on Tuesday. Photo: Ashwani Dhiman

It was the third victory in a row for Chinmey Super Kings and second consecutive win for SM Hero XI and CMA Bulls XI.

CMA Bulls XI hoisted a huge total of 211 runs after losing only one wicket in which the main contribution came through captain Rohit Jain who played a hurricane innings of 142 runs off 47 balls, studded with 15 sixes and 10 fours. Raghav Goyal scored 35 runs and Karan Goel remained unbeaten on 29.

In reply, M Jain Super Kings XI lost it meekly, scoring 129 runs for the loss of eight wickets. Puneet captured four wickets for the winning side.

The fourth match was played between Dominators XI and Jainsons Champions in which the former emerged victorious by 12 runs.