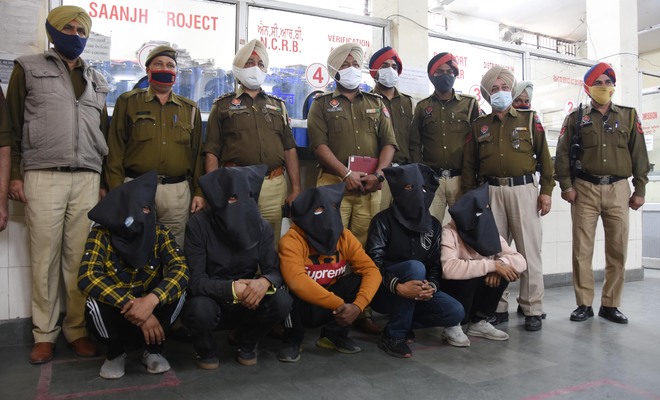 The accused in police custody in Ludhiana. Himanshu Mahajan

The Ludhiana police claimed to have busted a notorious gang of criminals and arrested five of its members.

The gang had attacked two persons brutally and damaged their car at Issa Nagri on February 8.

The police recovered a motorcycle and sharp-edged weapons from the gang members.

Two accused, Bhupinder and Heera, had been arrested by the police on February 16.

The police said on February 8, Pargat Singh and his friend Indermohan Singh of Islam Ganj were heading towards Issa Nagri in their Swift Car, when they were cornered by the gang members near the police division No. 2. Both were attacked badly by the gang and their car was also damaged.

The police registered an attempt to murder case against all accused then. They were also captured on CCTV cameras. Key accused Lotta had a notorious past as he was facing three different criminal cases registered in the past, while accused Prem was also facing two criminal cases. — TNS