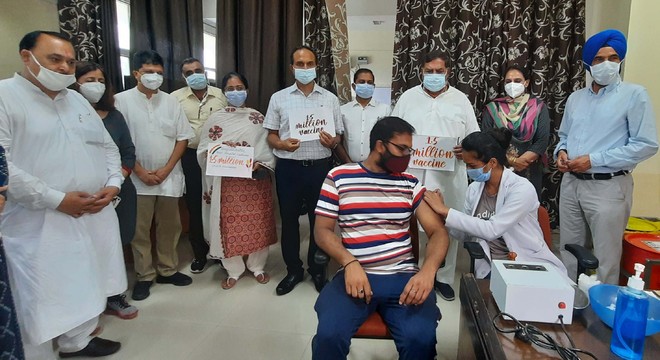 A man gets vaccinated against Covid in Ludhiana on Sunday. Tribune photo: Himanshu Mahajan

Achieving an extraordinary feat in the battle against the deadliest Coronavirus, the district on Sunday administered its 1.5 millionth jab.

Ludhiana, which is already leading the state with the highest coverage of people in its Covid inoculation drive since it was started on January 16, has given 5 lakh jabs in the past 43 days, despite vaccine being short in supply. The district had administered the one millionth jab on June 19 this year.

“Vaccine is the only effective weapon to rein in the virus and it would help society to return to normalcy. The district administration would leave no stone unturned by vaccinating every eligible person before the advent of the expected third wave,” said Deputy Commissioner Varinder Kumar Sharma.

He said the vaccine is being supplied by the Central Government and whenever it arrives, people must take the shots without delay.

Dr Bishav Mohan from the DMCH, Ludhiana, said the third wave would have minimal impact on the lives of people if all residents of the district get the vaccine soon.

He said vaccinated people would not need hospitalisation even if one contracts the virus and they could be treated at home.