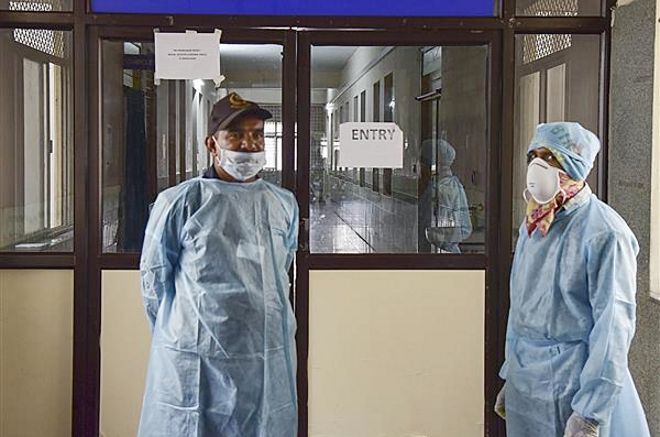 The second Covid wave, which rapidly continues to cause a devastating crisis, has set the alarm bells ringing in Ludhiana district, with hospitals failing to cope up with the unprecedented patient load, oxygen supplies running short and young and old, men and women falling prey to the deadly virus, some even before seeing the doctors.

The grim situation turned grimmer on Friday when almost no Level-3 (L3) hospital bed was left available, while nearly 80 per cent of the Level-2 (L2) beds in the district’s government and private hospitals remained occupied.

The official figures compiled by the district administration till this evening, a copy of which is with The Tribune, made it evident that Ludhiana was passing through the most difficult and trying times.

“As of now, we are in control of the situation but I appeal to the people to cooperate in bringing down the mounting positivity rate,” said Deputy Commissioner Varinder Kumar Sharma, while maintaining that if all the hospital beds remained occupied then the district would be in a difficult situation in the coming days.

He added that the district was arranging 2,300 oxygen cylinders daily from its own local sources, besides the additional supplies by the state government.

Taking cognisance of the serious situation, Chief Minister Capt Amarinder Singh, along with Chief Secretary Vini Mahajan, reviewed the present state of affairs in Ludhiana and five other worst-hit districts in the state. The CM has asked the state officials to rope in the Army and BSF for providing manpower support and creating more hospital beds.

The bed availability data in the district compiled at 5 pm on Friday showed that 448 of the total earmarked 457 Level-3 beds at all 70 hospitals — 68 private and two government — were occupied, leaving only 9 beds vacant.

Similarly, 1,109 of the total earmarked 1,459 Level-2 hospital beds in the district were full, leaving only 350 beds available.

The plight of critical patients in dire need of hospitalisation and life support could be gauged from the fact that the health infrastructure is completely hard pressed and unbearably full with leading and prominent hospitals like the DMC, Fortis, SPS, Ivy, Max and Lord Mahavir among 44 of the total 68 private facilities and both government hospitals left with no vacant Level-3 bed even before 5 pm. Another top hospital CMC was left with only two beds available till 5 pm.