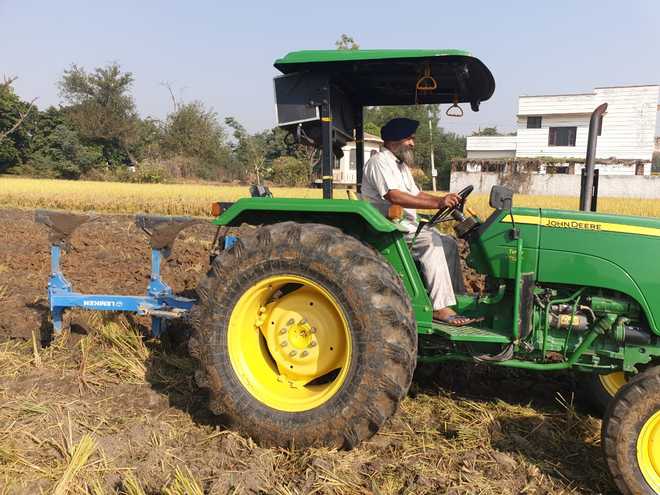 Sukhjit Singh, an environment conservator, who spreads the message of clean and green environment. Tribune Photo

Sukhjit Singh of Diwala village, who gave up stubble burning for good eight year ago, has advised the farmers of his region to stop this practice as there is no space for repentance and reform thereafter.

“To rise to the occasion and save the earth from further degradation” seems to be the motto of his life.

Sukhjit Singh who gave up straw burning has not only improved his crop quality but also doubled his income. He owes his success to Krishi Vigyan Kendra of Samrala which not only convinced him but made him practise the latest technology in his field to observe for himself the difference it makes in his living and livelihood.

Sukhjit Singh always wanted to do farming in a scientific way and was keen to learn and update himself with new techniques and technologies. Due to his learning zeal, he attended kisan melas and agricultural camps organised by Punjab Agricultural University, Ludhiana. He got associated with Krishi Vigyan Kendra, Samrala, when a team conducted an agricultural camp in his village. He took keen interest in farming practices and tried to keep himself abreast of the changes in the latest technology.

“One has to just keep in touch with Punjab Agricultural University, KVK Samrala and the Agriculture Department and worry about nothing. They are a ready support always and enable the farmer to cross every hurdle with ease. I always try to build up the faith of the farmers in the government schemes and different mechanical modes adopted from time to time. It is just that they have to do it practically once and get convinced. The Agriculture department and the administration have succeeded in bringing about positivity for farm machinery in the minds of the farmers to a great extent. Times are definitely changing for good,” Sukhjit believes. Sukhjit started following crop residue management practices and adopted in-situ residue management technologies eight years ago. In his initial years, he incorporated paddy straw into the soil for wheat sowing on an acre, which he slowly increased to 3 acres. “I operated the happy seeder under the guidance and supervision of KVK experts on 3 acres and did the rest of the wheat sowing with conventional methods. I observed that the results of wheat sowing with happy seeder were better compared to conventional sowing.

Dr Devinder Tiwari from KVK Samrala said, “Sukhjit has become a role model and a source of inspiration for farmers of nearby villages. He is contributing to preserve the environment and soil health by not burning the crop residue. Due to his motivated thought and close association with the KVK, he is a key person and our frontline campaigner. He was trained in hybrid seed production of maize, onion, crop residue management, custom hiring farm implements, mechanical transplantation of paddy and direct seeded rice. He is also part of the Sanjhi Kheti group, a farmer cooperative, which is engaged in direct marketing of farm produce. He is also a member of the KVK’s scientific advisory committee.”