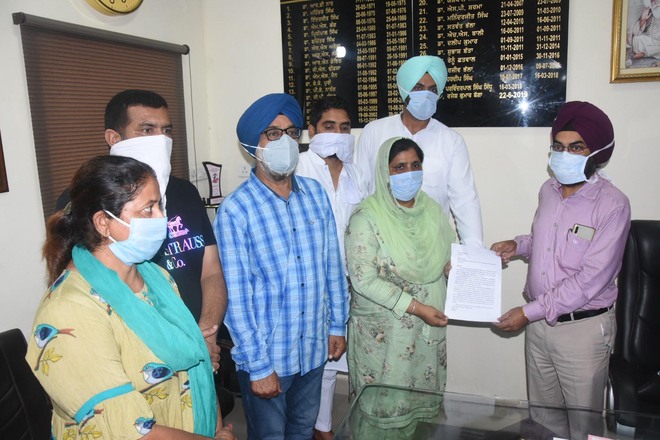 Leaders of AAP submit a memorandum to a health official in Ludhiana on Friday. Ashwani Dhiman

A delegation of Aam Aadmi Party (AAP), led by deputy leader of the Opposition and Jagraon MLA Sarbjit Kaur Manuke, today expressed concern over unavailability of beds for level 3 Covid patients in the hospitals of the district. They said according to reports, the district had just about 76 beds earmarked for the level-3 Covid patients, of which only six were available on July 29.

The AAP leaders termed the situation as grim. “Ludhiana is reporting maximum number of Covid cases and fatalities. Under these circumstances the shortage of beds for the most vulnerable patients is worrying,” they added.

Sarbjit said the scenario had resulted in tragic deaths of patients who were in dire need of care but did not receive it on time. She said on July 24, a 45-year-old businessman was in need of critical care but there were no beds available at the DMCH. He was later taken to the Civil Hospital where he died.

The party emphasised that the situation needed immediate attention and if it was allowed to continue, then the conditions in the district might go out of control, and many more human lives would be lost.

Sarbjit and other AAP leaders suggested that more beds for level-3 patients be arranged in the district without any further delay while claiming that of 761 beds for Covid care (450 in government and 311 in private health institutions), 685 were earmarked for level-1 and level-2 patients.