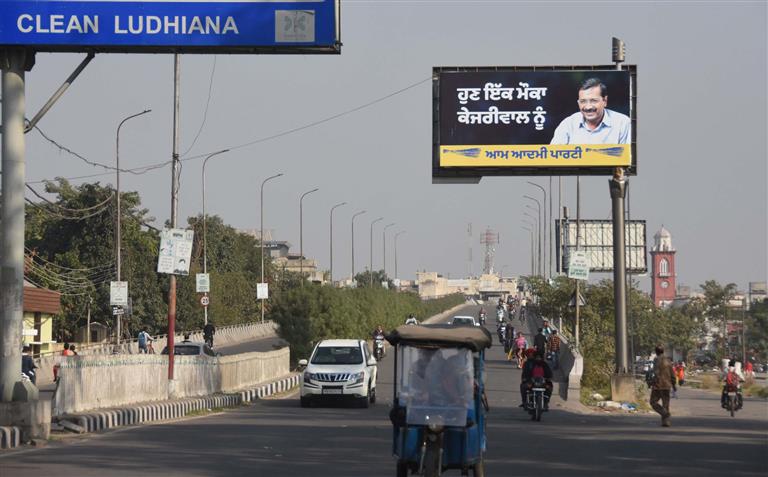 Aam Aadmi Party had contested the 2017 Assembly elections with a slogan “Kejriwal-Kejriwal, sara Punjab tera naal”. The party had then won 20 seats in the state, including three in the Ludhiana district, and became the main opposition party.

After almost five years, the AAP is raising the slogan “Ik mauka Kejriwal nu” for the upcoming Assembly elections. However, the party is yet announce its Chief Minister candidate.

AAP supremo Arvind Kejriwal recently stated that the party would be the first to disclose its CM candidate for Punjab.

AAP leaders are also carrying out campaigns in various parts of the district.

Kejriwal has promised 300 units of free electricity, free and better healthcare services and a grant of Rs1,000 per month for all women above 18 years if his party comes to power in the upcoming elections. And more promises are expected in the coming days.

The party has also promised to bring reforms in the education sector.

Daljit Singh Grewal, AAP halka in-charge from Ludhiana East, said: “People know how successive governments formed by traditional parties in Punjab had failed to resolve their issues. Ahead of every election, these parties made false claims and staged dramas to attract voters.”

“The people are well aware of the works done and promises fulfilled by the AAP government in Delhi. All promises will be fulfilled once AAP forms the government in Punjab in 2022. The education and health sectors will be improved too,” he said.

Grewal had joined Congress before the 2019 Lok Sabha elections but returned to the AAP fold earlier this year.

In Ludhiana, AAP leaders are conducting ‘nukkad’ meetings and paying door-to-door visits to make people aware about the promises made by Kejriwal.

The party also organised an event to hear the problems faced by the auto and taxi drivers in Ludhiana.

The party is also planning to campaign through autos. It had earlier organised a similar campaign during the Delhi Assembly elections.

The AAP leaders are also targeting the Congress government for failing to fulfil poll promises. They alleged that various mafias were still active in the state.

AAP’s Punjab spokesperson Ahbaab Singh Grewal said: “No action has been taken against drug mafia and other active mafias in the state.”

“As far as Ludhiana is concerned, local mafias have also not been eliminated. There is no check on corruption in government departments. People are being forced to pay more than the prescribed fee at parking lots. If AAP comes to power, action as per the law will be ensured against the mafias and those who looted Punjab,” he said.

The party has also announced incumbent Saravjit Kaur Manuke as its candidate for Jagraon constituency.

The candidates for the remaining 13 out of 14 constituencies in the district are yet to be announced.