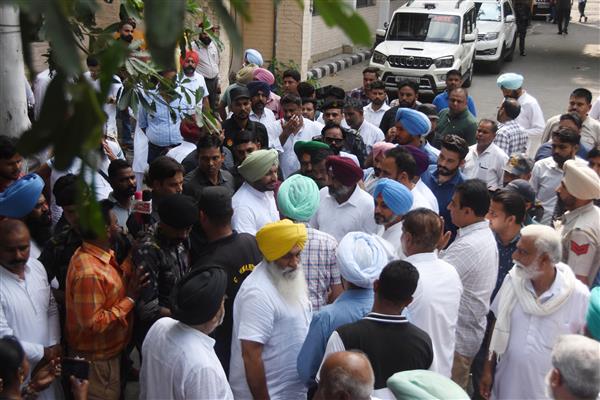 Pargat Singh, Ravneet Singh Bittu and other Cong leaders outside the Vigilance Bureau office in Ludhiana on Tuesday. Himanshu Mahajan

Congress leaders and workers continued their dharna outside the Vigilance Bureau office after the arrest of former minister Bharat Bhushan Ashu on Monday evening.

“Instead of bringing any change in the state, they are taking revenge from the former state government, which they should stop. What will the common man gain from the arrest of former ministers. Unemployment and corruption still remain the same,” he said.

He said the Congress leaders were sitting outside the Vigilance Bureau office in support of their aide and would continue to do so. “We are neither interrupting work nor raising slogans and creating disturbance. We are silently siting in support of Ashu,” Warring said.

He said it was being alleged that the registration numbers of scooters and motorcycles were entered in records for transporting food grains. It was the duty of the inspector to see which vehicle number was being entered. Gate passes were being given by the inspector and it was not the duty of the minister to check the passes, the Cong leader said.

“After nabbing Ashu, Vigilance sleuths conducted a search at his house but nothing was recovered. Female members of the family were asked to empty their wardrobes and drawers, which was unacceptable,” he said.

Members of the Mahila Congress, who were also present on the occasion, termed the arrest of the former minister as ‘Badle di raajneeti’.

“Bhagwant Mann should not work according to the web of Kejriwal. Punjab is his own state and he should work towards its welfare,” said a worker.

Regarding the complaint against Ravneet Singh Bittu, a party worker said he just demanded the arrest warrant and said nothing against officials of the Vigilance Bureau.