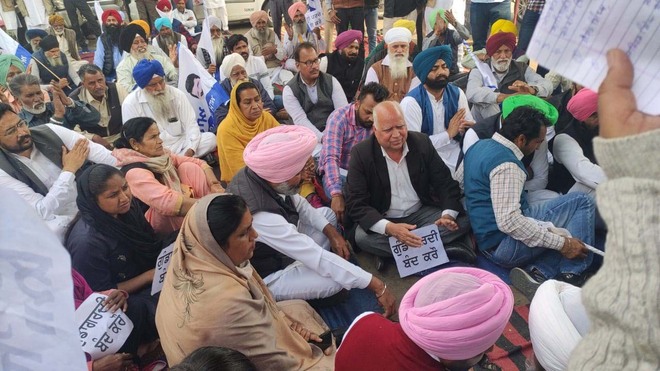 The Aam Aadmi Party (AAP) staged a dharna in front of the office of the Senior Superintendent of Police (SSP). Jagraon, against the FIR registered by the police against AAP’s senior leader and deputy leader of opposition in the Punjab Assembly Saravjit Kaur Manuke and party volunteers.

On the occasion, the party leaders said: “In the civic body elections, the ruling party, Congress, had used every possible means to loot the elections by undermining the values of democracy.”

The leaders alleged that in the Jagraon council elections, when the deputy leader of opposition in the Punjab Vidhan Sabha saw that they were influencing the electoral process, she opposed it.

They said it was surprising that dates of EVMs did not match as they were different.

“In some of the machines, Congress candidates were declared winners and seals of some machines were tampered,” they said.

They said later, Manuke was forced to block the highway with party volunteers and demanded from the administration to recount votes.

They said instead of the administration conducting recounting of the votes, the police registered a case against Manuke and her associates.

“The Captain government is filing false cases against AAP leaders and volunteers who were protesting for their rights,” said Cheema.

“When AAP comes to power in the state, stern action will be taken against those who have suppressed voice of people in an undemocratic manner,” said MLA Meet Hayer.