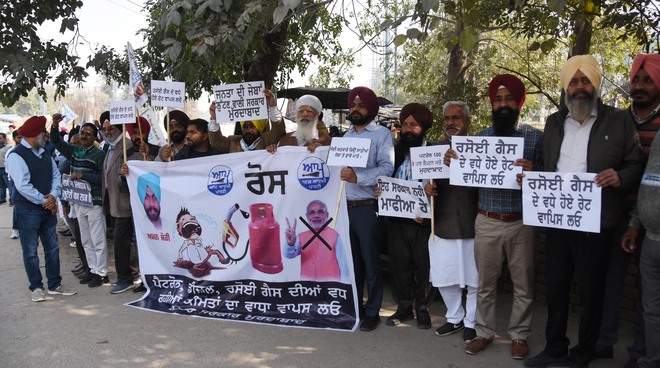 AAP activists during a protest against hike in fuel prices in Ludhiana on Monday. Tribune photo: Himanshu Mahajan

In view of the rising fuel prices, the Aam Aadmi Party (AAP) on Monday staged a protest in Ludhiana against the central government and state government. During the protest, AAP volunteers raised slogans against state as well as central governments. The protesting members were demanding reduction in in fuel and LPG rates.

Amandeep Singh Mohi, state joint secretary, said the pandemic had devastated businesses around the world. He said while people were suffering financially, the state government was imposing additional taxes on petrol and diesel to fill its coffers and imposing more financial burden on the people. He said the rising fuel prices were affecting everyone’s daily lives.

“Compared to the northern states, petrol is Rs4.1 more expensive in Punjab and diesel is Rs3.1 more expensive. Chief Minister Capt Amarinder Singh is not attention to the problems of the people,” he added.

Suresh Goyal, district president, AAP, was also present during the protest. He said the government must immediately reduce the taxes and reduce fuel prices.

They also carried out a protest rally from Jagraon Bridge to Clock Tower to mark their protest against the increased fuel prices.

During the protest, the members had kept a two-wheeler and an LPG cylinder on a cart to highlight the issue. LIP leaders Randhir Singh Sibia and Baldev Singh said: “Despite the fall in prices of crude oil in the international market, the Centre has increased the fuel prices. People are forced to suffer due to the increase in fuel prices by the Centre.”

Sibia said: “The increased prices of fuel had also led to rise in prices of essential items.”

LIP leader Baldev Singh said: “We urge the Central Government to reduce taxes on petroleum products and also commissions of oil companies so that the common man can get a sigh of relief.”