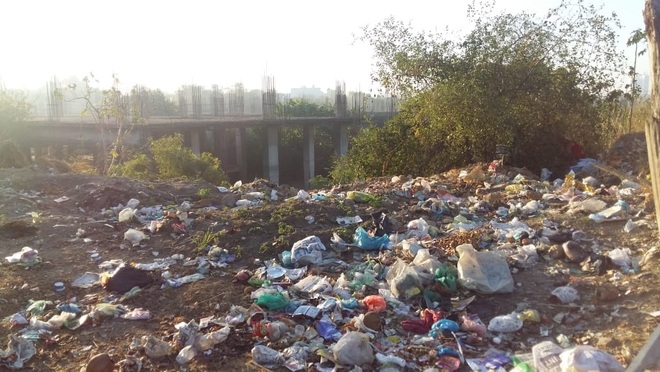 What was supposed to have been a world-class business and trade centre not only for the residents of Shaheed Bhagat Singh Nagar – a colony developed and maintained by the Ludhiana Improvement Trust (LIT) on the Pakhowal road here – but for the financial capital of the state, has turned into a pain for residents.

The reason for this is that the project has been abandoned and the LIT authorities have neglected the bare minimum upkeep and maintenance of the jinxed project.

Evan a cursory look at the project site shows the level of utter neglect of the LIT authorities with regard to the danger that the site poses to the vehicular traffic and other residents, the abject insanitary conditions, besides the wild growth of weeds and plants, rain and drainage water accumulation and the lack of adequate lighting around the site.

In a complaint to the Principal Secretary, Local Government, Punjab, with a copy to the LIT chairman, resident of the colony Arvind Sharma, former councillor Pran Nath Bhatia and others have said that corrugated sheets fixed around the site as a safety measure had either gone missing or had broken down, with the result that many passenger vehicles had fallen in the deep dug-up ditch in rain or fog.

Further, most of the street-lights around the site were non-functional and the abandoned project site had been converted into a garbage dump and rainwater from sewer pipes and road gullies was getting drained in the project site, which posed a big health hazard to residents with the potential outbreak of diseases.

Residents of the colony, Jaspal Singh Takkar, Amarjeet Singh, Jaspreet Singh, SS Kalsi, Ishu and Lynia Sharda Sharma, have maintained that even though the matter was under litigation, being the promoter of the project, it was the duty of the LIT authorities to ensure the bare minimum maintenance of the site – at least to the extent that it should not pose a threat to the safety and health of the residents and other visitors to the colony.

Former chairman of LIT Ashok Juneja (see pic) has urged the state government to intervene in the matter and facilitate an amicable solution between the LIT and Today Homes for the revival of the city centre project on the basis of the final arbitration award pronounced by former Chief Justice of India RC Lahotia.

Residents of the colony have maintained that even though the matter was under litigation, being the promoter of the project, it was the duty of the LIT authorities to ensure the bare minimum maintenance of the site – at least to the extent that it should not pose a threat to the safety and health of the residents and other visitors to the colony