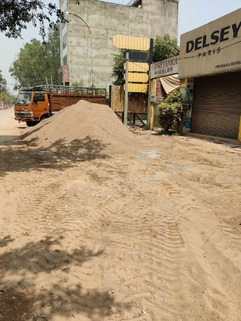 Construction underway at the project site on Malhar Road.

While there have been several protests against the project of laying interlocking tiles on Malhar Road in Sarabha Nagar under the ‘Smart City mission’, a city-based activist has now highlighted quality issues in the ongoing construction work of the project.

In a complaint to the Additional Chief Secretary, Local Government, Punjab, the Director, Local Bodies, Punjab, and the Chief Vigilance Officer, Local Government, Punjab, Ramesh Nayyar, a city-based social activist has alleged that the construction agency assigned the project for converting Malhar Road into a smart road under the ‘Smart City mission’ was using stone dust for preparing base bed before laying interlocking tiles in place of coarse sand as per specifications of the work order.

“Stone dust is being used in place of coarse sand to prepare cushion for interlocking tiles as it is much cheaper in comparison to coarse sand which is normally used to prepare base for laying interlocking tiles. Large mounds of stone dust have been dumped at the site but in the absence of proper supervision by field staff of the MC and negligence on the part of their superior officials, the construction agency is flagrantly violating the specifications laid down in the work order and compromising with the quality of work,” said the complainant.

Nayyar said stone dust laid beneath the interlocking tiles would create settling and drainage problems which was not the case if coarse sand, as per the specifications, was used for the purpose.

“Interlocking tiles laid on a bed of stone dust tends to get uneven if exposed to waterlogging, have shorter life span and tiles tend to come off after a short time because of poor settling quality and is said to be most unsuitable for bedding layer under interlocking tiles,” asserted the complaint.

Nayyar has called for a high level probe into the grave lapse and compromise with quality in execution of Smart City projects while pointing an accusing finger towards the field staff and supervisory officials of the MC for their alleged connivance with the erring construction agency.

The MC Superintending Engineer, Rahul Gagneja, however, denied the allegations saying the work was being carried out as per specifications and MC field staff had been directed to monitor the material being used and quality of workmanship. “If any irregularity is found, it would be got rectified according to specifications of the work order,” he added.