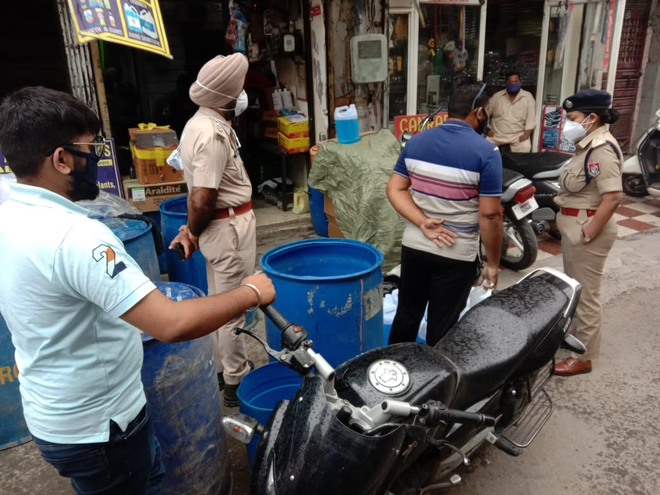 ADCP 1 Pragya Jain caught a man making spurious sanitisers openly on the roadside at Ekbalganj on Wednesday. The ADCP, along with the ACP (Central), Waryam Singh, was patrolling in the city to nab curfew violators.

The accused has been identified as Vipul Jain, a resident of GK Estate, Chandigarh Road, Ludhiana.

“I was checking curfew violations and suddenly I saw a man filling plastic cans of sanitisers. He was preparing sanitiser by mixing some chemicals. He was not having any permission to prepare the same,” she said.

The ADCP said nobody can manufacture sanitisers without approval from the authorities concerned.

“I have also called a health team to the spot to collect samples. Once the report of samples is received, legal action will be taken, “said ADCP Jain.

The police have registered a case under Sections 420, 120-B of the Indian Penal Code, Sections 18(A)18(c) Drug Cosmetics Act and Sections 4, 5 Disaster Management Act against the accused.