After May, dist sees no Covid death in Sept : The Tribune India 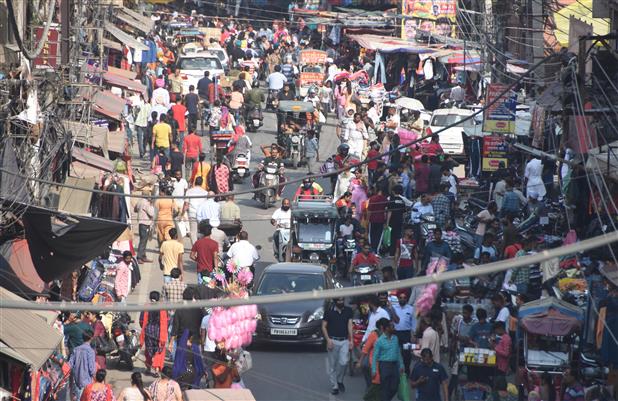 No death due to Covid was reported in the district during September, the official figures have confirmed.

It was after a gap of three months that the state’s biggest and largest district, in terms of area and population, has recorded a casualty-free month this year. May had also seen no death due to the deadly virus in Ludhiana.

However, one person died of Covid here on Saturday, the first day of October. Before this, two virus casualties were reported in the district on August 30 with no death reported between August 31 and September 30. 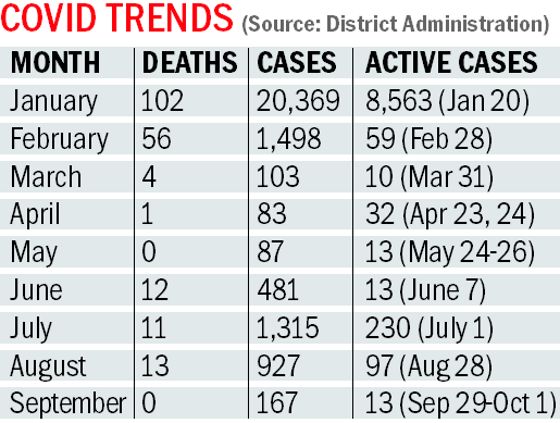 The monthly Covid cases have also dipped drastically in September, which has logged 167 virus patients. This was fourth lowest during this year and almost 82 per cent less than 927 positive cases reported during the month of August, the officials said.

Besides, the active cases have also touched the four-month low with 13 Covid patients remaining active in the district since September 29, which was the lowest after as many active cases reported here on June 7.

The data of Covid trends, compiled by the district administration, a copy of which is with The Tribune, showed that barring four days when the daily cases touched double figure, with maximum of 18 on September 12, all other 26 days in the past month tested positive Covid patients in single-digit, with only 1 daily case witnessed on three days, 2 on five days, 3 on six days, 4 on five days, and remaining days reporting daily patients ranging between 5 and 9.

When it comes to active cases, the count has come down considerably from the month’s highest figure of 77 active cases on September 12 to the four-month lowest of 13 since September 29.

However, the active case count started increasing again from June 7 when it touched 20, went on to touch 230 on July 1, and further rose to 350 on July 30, before coming down to double digit of 97 on August 28. Since then, it has been receding.

“With the festive season round the corner, the residents should continue to exercise restraint and follow Covid-appropriate behaviour to keep the deadly virus at bay. Social distancing, face masks, and hand hygiene should not be ignored.” said Surabhi Malik, Deputy Commissioner.