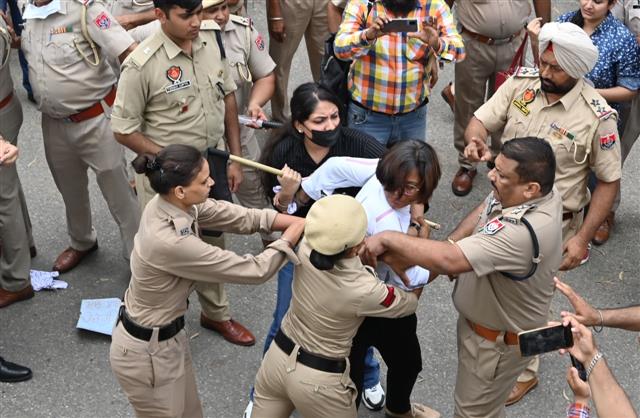 Police officials stop agitators from moving ahead during a protest in Ludhiana on Monday. Photo: Ashwani Dhiman

Members of the 1158 Assistant Professor and Librarian Front Punjab were detained by the police here on Monday when they were going to carry out a protest march from Punjabi Bhawan to Guru Nanak Stadium, the venue where Chief Minister Bhagwant Mann had to hoist the national flag on Independence Day. The members were detained near the Punjabi Bhawan.

They blamed the state government for not fulfilling their demands regarding the recruitment process. “We were manhandled by the police on the instructions of the government and forcibly arrested,” the members alleged.

A member of the front said the process regarding the recruitment of assistant professors and librarians in government colleges was cancelled by the High Court recently. He said, “The government did not follow- up on the case properly in court. After the court’s order, not a single statement came from the state government in favour of the affected candidates.”

The members said, “Today, a protest was held against the CM on his arrival by the front. However, we were not allowed to carry out the protest march. Our members were arrested and taken to various police stations.”

Later, they were released. They said if the government did not complete the recruitment process, they would be forced to intensify their agitation.