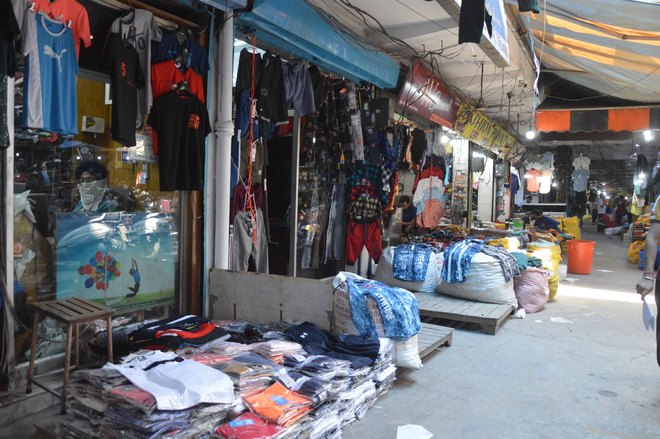 Akalgarh Market, one of the wholesale garment markets of the city, has opened almost after two months of lockdown. The market has around 800 shops.

Customers from Punjab, Haryana, Himachal Pradesh and other states visit the market in large numbers. The market, where hundreds of customers can be seen at any point of time, is now wrapped in silence.

Gurdeep Singh Gosha, chairman of Akalgarh Market Shopkeepers Association, who also owns shops in the market, said around 5,000 workers worked in this market many of whom had lost their job. "The shopkeepers of the market have incurred loss worth crores in the past two months. Customer footfall has now been reduced to 20 per cent. We have to wait for another six months for business to regain its normal pace," added Gosha.

Gosha said huge quantities of summer garments are lying stacked in shops as no customer from Punjab and other neighbouring states is turning up. Shopkeepers are not much hopeful of business to pick up in winter either.

Manpreet Singh Bunty, president of Akalgarh Market Readymade Garment Association, who owns shops in the market, said he was quite hopeful that the market would bounce back soon.

Bunty, however, feels due to exodus of migrant workers to their native places, there will be minimal production of garments. In such scenario, our wholesale shops will get short supplies. "The market receives 30 per cent customers from Himachal Pradesh, 20 per cent from Haryana and 20 per cent from Punjab and Jammu and Kashmir. The lockdown has reduced the arrival of customers to a few per cent only. I feel the two-month lockdown has sent the market's business to almost a year back. But we are not shunning hope and soon, we will again see flourishing business in the market," said Bunty.

Bunty said many of his clients from Punjab and other states had not cleared their old bills citing the lockdown. He fears losing clientele if he forces them to make payments.

Other shopkeepers are also skeptical of getting full stocks given low production in the hosiery industry due to the exodus of labour.