Amid uproar, most proposals get nod in Ludhiana MC General House : The Tribune India 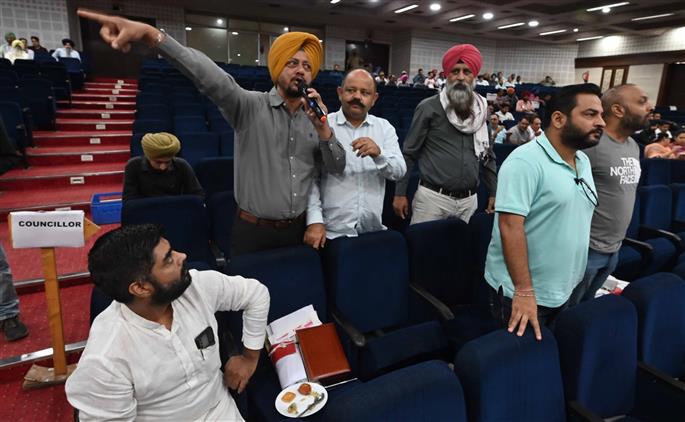 Councillors at the MC’s House meeting in Ludhiana on Tuesday.

Amid heated arguments between a few members of the MC General House, it approved resolutions on Tuesday regarding verified lists of 3,542 contractual safai karamcharis and sewer men whose jobs are to be regularised. The House meeting was held at Guru Nanak Dev Bhawan that continued for around six hours.

Proposals regarding installation of additional LED street lights, printing of challan books against banned single-use plastic items and other proposals have been approved.

Notably, questions were raised over the lists during the previous House meeting and a probe was marked into allegations of discrepancies in the lists.

On Tuesday, when proposals about the verified lists of 2,428 contractual safai karamcharis and 1,114 contractual sewer men were presented before the House, Congress councillor Mamta Ashu questioned what action had been taken against officials responsible for discrepancies in the previous lists. However, no action was taken in this regard.

MLA Gurpreet Gogi raised a demand before the House to approve these proposals related to the lists of contractual safai karamcharis and sewer men to be regularised, instead of further delaying the process. Meanwhile, Gogi and Mamta Ashu also entered into heated arguments.

Afterwards, Mayor Balkar Singh Sandhu said the proposals related to lists of contractual staff were passed. The Mayor, however, said action would be taken against officials who were responsible for discrepancies in the previous lists.

Around 88 contractual safai karamcharis and sewer men were removed from the lists after verification. The officials claimed these cases were found to be of death, absenteeism or cases wherein employees have left their jobs.

Besides, a proposal to regularise the jobs of 456 other contractual employees, including beldar, drivers, helpers, etc, was also approved.

The MC House has given required approvals related to the 24x7 canal water supply project and the construction of water treatment plant under the same project. As several councillors and MLAs lack information regarding the project, it was announced that a meeting would be called to make all councillors and MLAs aware of the same.

Amid objections raised by many councillors, a proposal to deploy staff for data collection for delimitation of wards on an outsourcing basis was not approved by the MC House today. The proposal was kept pending. Notably, staff was already deployed for data collections and around 70 per cent of the survey was done. However, the work was later stalled as the deployed staff was not given any salary.

When a proposal in this regard was presented before the House, councillors raised questions as to how the staff was earlier deployed without approval from the House. However, AAP MLAs, including Gurpreet Gogi, had raised a demand to approve the proposal.

As proposal is now pending, salaries could not be released to the staff who had already been deployed to collect the data.

Ahead of the upcoming MC elections, the House has approved a resolution to waive off penalty and interest on arrears on account of water supply and sewerage charges. The Department of Local Government would take a final decision in this regard.

Proposals regarding the installation of additional LED street lights, printing of challan books against the banned single-use plastic items and other proposals have been approved. The House has decided that there would be no need for any “no due certificate” from Building Branch for obtaining the TS-1 certificate.

A total of 60 proposals on the main agenda were presented before House members. Of them, 50 were approved while a few proposals were kept pending by the House. In some cases, committees would be formed to take decisions on respective proposals.

Besides, a table agenda of 14 items was also read before the House. However, one proposal was kept pending.

Leader of Opposition Jaspal Singh Giaspura raised questions over the dilapidated condition of Focal Point roads, badly broken stretches of the Dhandari flyover, Sherpur Chowk and other areas of the city. Councillor from Ward 38 Kuldeep Singh Bitta raised the demand before the House to take action against a contractor for making poor quality ATI and Daba roads in the ward. Councillor from Ward 36, Harwinder Singh Kaler said the Gill Road construction work had been delayed by the firm concerned, demanding it must be blacklisted.

Controversy over stalls on MC’s road

Seeking action, MLA Ashok Parashar Pappi alleged that a contractor had allowed stalls on the MC’s road and also charged Rs 2.5 lakh from each stall in an unauthorised manner.