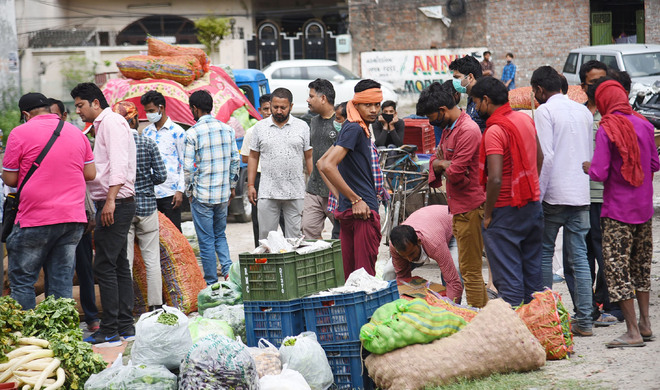 An unpleasant situation was witnessed at the main Sabzi Mandi near Jalandhar bypass today when arhtiyas threatened that if the old system was not restored and more vendors were not allowed to lift stocks, they would shut the mandi.

Arhtiyas have criticised the district administration and authorities as they alleged that they had to suffer losses due to new system being adopted by the latter. They said because of this new system their stocks were piled up in mandis.

Talking to The Tribune, Amarvit Singh, an arhtiya, said many arhtiyas got together in mandi early this morning. “Our 80 per cent of the stocks of fruits/vegetables are lying with us as these could not be lifted. Just a handful arhtiyas, who are enjoying the power of selling stocks to vendors or retailers, are making the profits. All others in mandi have been suffering,” he said.

Another vendor said not just the arhtiyas, but also the common man is paying a heavy price of this nexus. He said if a product was sold for Rs 50 per kg in wholesale market, the limited retailers (who are allowed/given passes) sell it further for Rs 90-100 per kg, hence raking profits even at this time of crisis. This has been going on with impunity.”

The arhtiyas said barring few, all other arhtiyas wanted the earlier practice to continue so that stocks are lifted and arhtiyas do not incur losses. They also threatened to shut their shops in mandi if their plea went unheard.

Kamlesh, a home maker, said it took many days to streamline the process, now when vegetables and fruits were being delivered (even if selected items), any sort of disruption must be avoided.