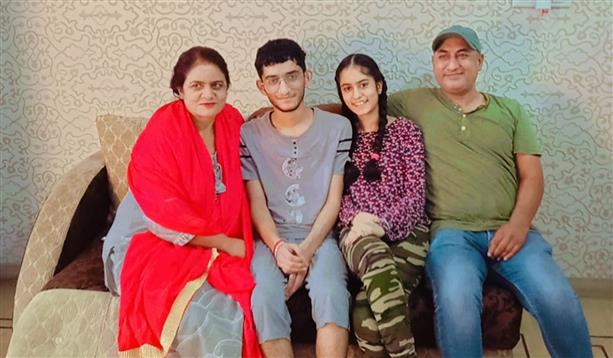 Aryaman celebrate his success with family.

The National Testing Agency (NTA) has announced the results of the JEE-Mains Session 2 on Monday. A number of candidates from Ludhiana scored above 99 percentiles in the exam.

Aryaman said he wants to study BSc in Physics from the Indian Institute of Science, Bengaluru. His father Charan Das is a businessman and mother Neelam Devi is a government teacher. He passed out Class XII in the non-medical stream with 94 per cent marks from Kundan Vidya Mandir. Aryaman likes to play sports.

Keshav Rai of Shaheed Karnail Singh Nagar bagged AIR 854. He scored 99.83 percentile during the second attempt while he had scored 99.91 percentile in the first attempt. He said his next aim was to clear the JEE (Advanced) 2022 as he wants to pursue computer science engineering at IIT, Munbai. His parents, father Dr Azad Rai and mother Dr Geetika Rai, are doctors by profession.

Keshav passed out Class XII (non-medical) from BCM Arya Model School and obtained 96.6 per cent marks. He said his parents and younger brother helped and motivated him to clear the exam. They always encouraged him to focus on only his studies. He said his younger brother, who is studying in Class XII, was also interested in computer science.