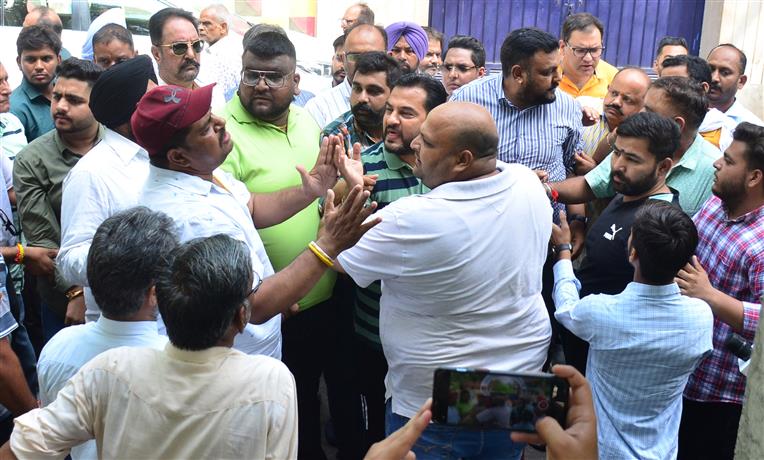 Cong workers and aides of complainant in the transportation tender scam argue outside the VB office. Himanshu Mahajan

In the multi-crore transportation tenders scam, a confrontation was reported between Congress workers and the complainant, Gurpreet Singh, outside the office of the Vigilance Bureau (VB). The Vigilance Bureau had registered a case against former Congress minister Bharat Bhushan Ashu and others on the complaint of Gurpreet in which Ashu and a contractor, Telu Ram, were arrested.

“I didn’t say anything to the Congress workers but Congress councillor Sunny Bhalla showed a threatening gesture to me. When I asked him to behave properly, he did not budge and started heated arguments with me,” alleged Gurpreet.

He said when he could lodge a complaint against the former minister, he did not fear any Congress worker.

He said he would also set up his tent outside the Vigilance Bureau office to seek strict punishment for Ashu.

Sources said later, Gurpreet’s tent was removed by the police for precautionary purpose as it might create tension outside the Vigilance office.

Meanwhile, Sunny Bhalla said he had not misbehaved or indulged in a fight with Gurpeet and the latter was levelling baseless allegations against him.

After the Vigilance Bureau identified six prime properties reportedly made from proceeds of corrupt practices by the former minister’s PA, Meenu Pankaj Mahlotra, the special team of officials from the Punjab Vigilance Bureau took stock of all properties and inquired about the present market value of the same. Even the role of investors, who reportedly helped the PA in buying these properties, is also being scanned. The VB is likely to start proceedings to attach the properties soon. Meanwhile, Ashu’s PA, who was to submit details of properties or bank accounts of Ashu by Thursday, did not submit the report till this evening.