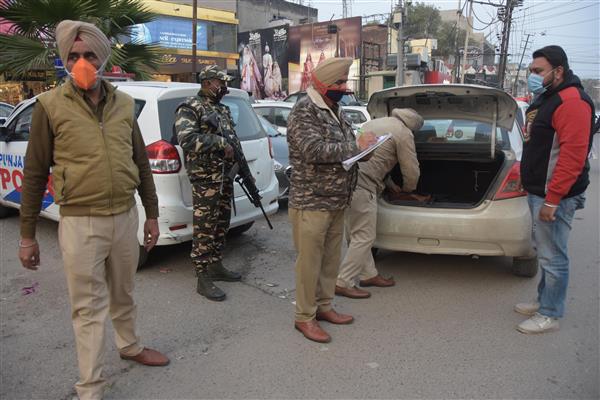 Police and paramilitary personnel check a vehicle in Ludhiana.

Ahead of the Assembly elections in the state, the Ludhiana Police Commissionerate has prepared a list of notorious criminal elements who can create law and order issues during the elections in Ludhiana.

As per information, a list of over 300 troublemakers has been prepared, who could trouble the police before and on the election day.

“As many as 307 troublemakers have been identified. These miscreants are facing criminal charges, including cases under the Arms Act and FIRs during the past Assembly or Lok Sabha elections. Some of them are close aides of politicians belonging to different political parties and names of some are recorded in the past as ‘bad elements’ at police stations,” a senior police official told The Tribune on Wednesday.

The official said all SHOs had been told to keep a tab over these persons either by issuing a kalandra (complaint) under Section 107 of the CrPc, which mandates them to appear before the Magistrate and, if required, the police could also send them to judicial custody, suspecting they might create any law and order problem.

Before the poll code of conduct came into force on January 8, the Ludhiana police had already initiated the excercise of asking people to deposit their licenced arms in December. Till January 12, 77 per cent arms have been deposited by holders. As per the arms data, the Ludhiana police have issued around 16,600 arms licences on which 19,400 arms have been obtained by holders. Of which, 14,885 arms have been deposited by holders, most of them at police stations and the rest at private gun houses. To encourage people to deposit arms, the police had made announcements from village gurdwaras and temples .

As many as 2,983 proclaimed offenders (POs) were at large in criminal cases, of which the police have nabbed 307 in recent weeks by initiating a special drive. Of the total POs, 539 are those who are at large after committing heinous crimes such as murder, attempt to murder and robberies while 2,444 have committed non-heinous crimes. Some of the POs are at large from over three decades and a few of them have already died. A police excercise is already on to remove the names of the dead POs or those facing minor criminal cases from the list. Besides, seven criminals who have jumped parole are also being traced. Sixty nine POs are hiding in foreign countries. Of these, 54 are in Nepal, eight in Canada, four in the USA, two in France and one in Dubai.