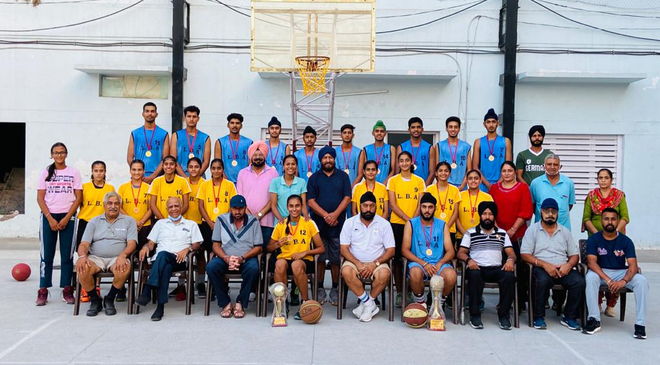 The District Basketball Association (DBA), Ludhiana, honoured trainees (boys and girls) of the Ludhiana Basketball Academy (LBA) who romped home champions in the Punjab State Youth Basketball Championship (U-17), held from September 9 to 12 in Bathinda.

Teja Singh Dhaliwal and Vijay Chopra, general secretary and vice-president, Punjab Basketball Association, along with office-bearers of the DBA were present at the function.

In the boys’ section, LBA trainees stamped their supremacy by clinching all league matches and laid their hands on the winners’ trophy. They outplayed Muktsar 51-37; thrashed Patiala 78-41 and defeated hosts Bathinda squarely 58-33.

Bathinda secured the second position while Muktsar and Patiala finished at third and fourth place, respectively.

In the girls’ category too, LBA players came out triumphant. They routed Mohali 49-10; outwitted Ludhiana district 72-35 and then got the better of Bathinda 42-28 to emerge champions. Bathinda and Mohali finished at the second and third positions, respectively, whereas Ludhiana district had to be content with the fourth position. — OC