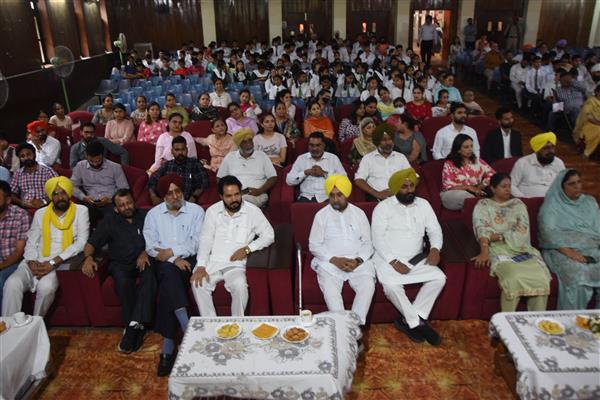 Participants during the launch of drive against single-use plastic at Government College for Girls, Ludhiana. Photo: Ashwani Dhiman

The district administration and MLAs today launched an awareness drive on the single-use plastic ban. Residents were encouraged to use jute and cloth bags to save environment from hazardous effects of plastic during the drive.

The MLAs and DC said single-use plastic items were used only once and discarded by the people. They said single-use items like ear buds, candy and ice-cream sticks, polystyrene (Thermocol for decoration), PVC banners less than 100 microns thick, stirrers, wrapping films around sweet boxes, invitation cards, cigarette packets, plastic flags, cups, glasses, carry bags, straws and certain kinds of plastic packaging material were banned on July 1. They said plastic waste had become a source of pollution as these items were non-biodegradable.

“The plastic turns into microplastics first entering our food sources and then the human body, which is extremely harmful,” they added.

The MLAs and DC stressed that all shopkeepers must also charge for plastic carry bags and encourage customers to bring cloth or jute bags from home. Later, they also visited stalls where alternatives of single-use plastic, made from corn starch, were displayed.