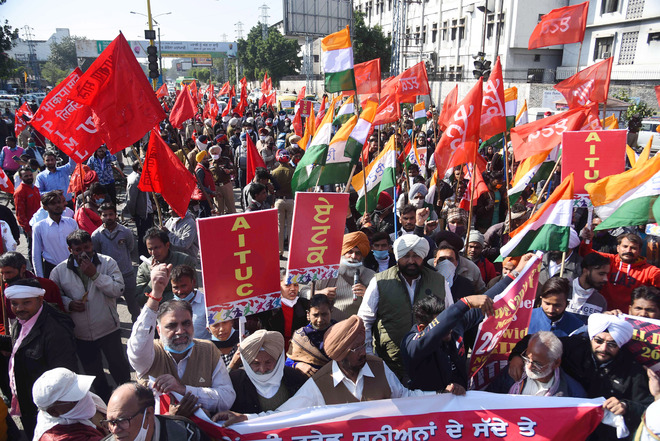 Members of bank and trade unions protest at Bharat Nagar in Ludhiana on Thursday. Himanshu Mahajan

The Punjab Bank Employees Federation held a strike today for the fulfilment of their demands. On the call given by the Central Trade Unions, other independent trade/industrial federations and the banking sector, including All India Bank Employees Association (AIBEA), AIBOA and BEFI, a massive rally was organised today by the PBEF, Ludhiana, in front of Canara Bank, Bharat Nagar Chowk here.

While addressing the meeting, Naresh Gaur said the public sector banks (PSBs) had a special and pivotal role to play. Public sector banking was ushered in the country when the State Bank of India (SBI) came into being in 1955. Afterwards, 14 major private banks were nationalised in 1969 and another six private banks were nationalised in 1980. Thus, public sector banks (PSBs) became the mainstay of the Indian banking sector. The PSBs have been playing a leading role in augmenting the precious savings of people and deploying the same as credit to all needy sectors of the economy. From a mere 8,000 branches, today banks have grown into an industry with 90,000 branches. Branches have been opened in many nook and corner of villages, thus taking banking to the common man. From a total deposit of Rs 5,000 crore, today the PSBs had mobilised nearly Rs 85 lakh crore as deposits. From total loans and advance of Rs 3,500 crore, today the PSBs have extended loans to the extent of Rs 60 lakh crore.

Meanwhile, joining with other sections of the working class, a complete strike was observed today by the members of the Northern Zone Insurance Employees Association in all LIfe Insurance Corporation (LIC) offices of the Ludhiana division. They gathered in front of Unit 3, Sham Nagar, and took out a rally for registering their protest. The rally was also attended by pensioners of the LIC.

Their demands include no privatisation of public sector units, including units in the financial sector; scrapping of the National Pension System (NPS), improvement in EPS 95 and pension for all workers; withdrawal of the government circular on forced premature retirement of government and PSU employees; withdrawal of anti-worker labour codes and anti-farmer farm laws; expansion of the rural employment guarantee scheme and introduction of employment guarantee in urban areas; 10-kg free ration per person per month to all in need and cash transfer of Rs 7,500 per month for all non-income tax paying families.

While addressing the rally, Amarjit Singh, divisional secretary, opposed the government move to sell a part of the stake of the LIC by bringing the IPO into the corporation.

‘We are better than this’:  Indian-origin TV presenter slams ‘racist joke’ at British Curry Awards