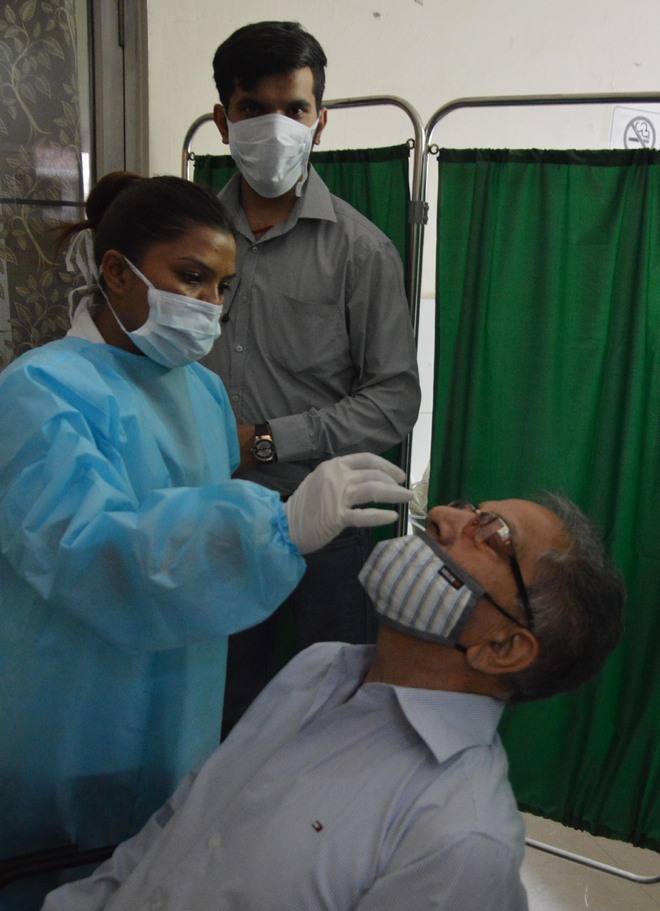 A person gives his sample for the Covid test in Ludhiana on Sunday. Inderjeet Verma

Breaking all previous records, today 530 persons test positive in a day. This is the highest single-day spike since the outbreak of the virus in the district in March 2020. During the first wave, the highest single-day spike was 462 cases on September 17. The second wave is proving to be more infectious. Though the graph of the Covid-19 spike is heading towards north, people continue to adopt a careless attitude towards safety protocols. During the Sunday flee bazaar at Chaura Bazaar today, a big rush was witnessed, like the pre-Covid times. Shoppers were jostling with each other and did not care to wear masks.

Dr Sukhjeevan Kakkar, Civil Surgeon, Ludhiana, said people were not paying any heed to Covid precautions now, which was a matter of concern for everyone.

He said earlier, people were following the Covid norms which resulted in reduction of new cases being detected in the end of October last year. However, lately people started avoiding wearing mask.

Those who tested positive today also include three healthcare workers, an undertrial, two pre-operative cases and three teachers, which include a teacher from DAV School, Pakhowal Road, another teacher from GBS, Harbanspura, and one teacher from the GSSS, Has Kalan.

Meanwhile, further ramping up the vaccination drive in the district to stem the virus spread, Deputy Commissioner Varinder Kumar Sharma on Sunday dedicated mega Covid immunisation camps in Doraha, Khanna, Samrala, Macchiwara and Kohara to facilitate maximum beneficiaries to get inoculated near their homes, especially among rural folk.

Similarly, the camps were also organised in all 13 blocks of the district, including Ludhiana 1, Ludhiana 2, Jagraon, Samrala, Dehlon, Maloudh, Pakhowal, Sidhwan Bet, Sudhar and Raikot.

The Deputy Commissioner said with all residents above the age of 45 were now eligible for getting vaccinated, the administration was already in the mission mode and people must come in a large number to get the jab.

The Union Ministry of Health and Family Welfare has been actively engaging with state governments in coordinating and collaborating efforts towards preparedness and response to the pandemic. The ministry has deployed Central teams to most affected districts in the state. The feedback received from the teams reveals that there is a need to enhance focus on contact tracing in Patiala and Ludhiana. Besides, Patiala and Ludhiana have reported slow pace of Covid-19 vaccination among persons more than 45 years of age (with co-morbidities) and those above 60 years.