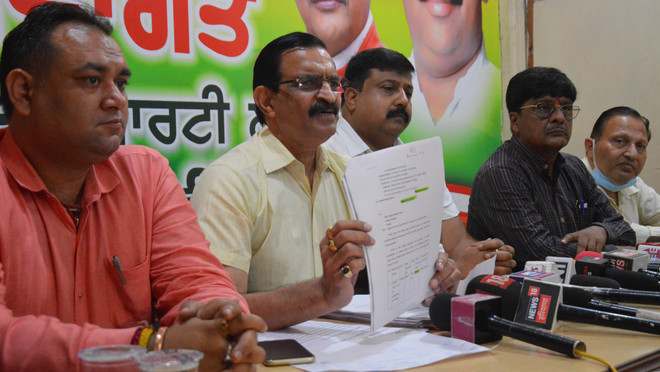 BJP leader Anil Sarin, along with other local party leaders, briefs the media in Ludhiana on Tuesday. Photo: Inderjeet Verma

The Punjab BJP unit has targeted the state government by alleging a multi-crore scam in the purchase of ‘Fateh’ kits.

In a press conference here, Anil Sarin, chief spokesperson, Punjab BJP, and other senior leaders of the party said the state government had floated tenders to procure 50,000 ‘Fateh’ kits. A firm, Sangam Medical Store, had offered the kit for the lowest price of Rs 837.76.

However, the state government issued a purchase order by increasing the price of kit at Rs 940.80 and combined two other companies with Sangam store and divided the order of 50 thousand into three parts.

Sarin alleged that the government bought only 16,668 kits from the store. The remaining 33,332 kits were purchased from two other companies. Surprisingly, when the earlier firm was willing to give for Rs 837.76, why did the state government went for Rs 940.80 per kit, he asked

Not only 17 days later, the state government bought 20 thousand kits of the same items from another company by paying even more for the similar kit. The BJP leaders demanded a CBI probe into the scam worth Rs 8 crore and asked the Punjab Chief Minister and the Health Minister to resign as during tough times of Covid, such scams were done by the government, alleged Sarin.